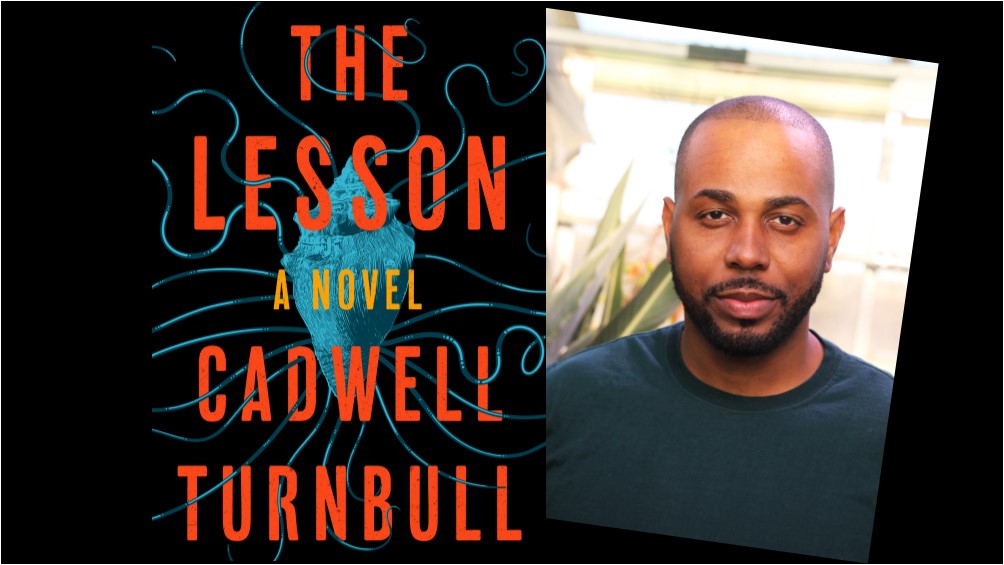 An exciting debut voice in Science Fiction is coming to Woodstock! Join us as we welcome Cadwell Turnbull to talk about his novel The Lesson, and find out first hand just what all of this advance praise for his book is about. For his event, Turnbull will be in conversation with Andrew Liptak, weekend editor for the The Verge.

“A parable of cultural conflict, conflicting moralities, colonialism, and the costs of being a decent person in the midst of desperate times…This is one of those books in which the setting becomes almost a character in itself. The Virgin Islands and their people are drawn in vibrant detail…Turnbull has been compared to Octavia Butler, and in his case I think the observation is a valid one. The Lesson isn’t just a serious, important book—it’s also a fun and rewarding one.”
-Analog Science Fiction and Fact

“…Turnbull’s rich debut novel about family, love, and loyalty in turbulent times….Turnbull uses a beautifully drawn cast of black characters to convey the complexity of ordinary hardship in extraordinary times. This is an ideal story for fans of Emily St. John Mandel’s Station Eleven and other literary science fiction novels.”
-Publishers Weekly (Starred)

About the Book: After a race of advanced aliens settle in the U.S. Virgin Islands, two families confront the personal and social impact of the alien presence, while growing violence between the Ynaa and local Virgin Islanders threatens even greater tragedy. The Lesson explores the nature of belief, the impact of colonialism, and asks how far are we willing to go for progress?
Breaking ground as the first science fiction novel set on St. Thomas, in the US Virgin Islands, The Lesson is not only a beautifully-written, thought-provoking work, delving deeply into themes of colonialism, but also vividly draws the community of the Caribbean city of Charlotte Amalie, the author’s hometown.

About the Author: Cadwell Turnbull is a graduate from the North Carolina State University’s Creative Writing MFA in Fiction and English MA in Linguistics . He was the winner of the 2014 NCSU Prize for Short Fiction and attended Clarion West 2016. His short fiction has appeared in The Verge, Lightspeed, Nightmare, and Asimov’s Science Fiction. His Asimov’s short story “When the Rains Come Back” made Barnes and Noble’s Sci-Fi & Fantasy’s Short Fiction Roundup in April 2018. His Nightmare story “Loneliness is in Your Blood” was selected for The Best American Science Fiction and Fantasy 2018. His Asimov’s novelette “Other Worlds and This One” was also selected by the anthology as a notable story. The Lesson is his debut novel.

About the Interviewer: Andrew Liptak is a writer and historian from Vermont. He is the author of the forthcoming book Cosplay: A History (Saga Press, 2021), and is the Weekend Editor for The Verge, which covers the intersection of science, technology, art, and culture. He is the co-editor of War Stories: New Military Science Fiction. His nonfiction work has appeared in Armchair General Magazine, Clarkesworld Magazine, io9, Kirkus Reviews, Lightspeed Magazine, Seven Days, Tor.com, VentureBeat, and other publications. You can visit his website at www.andrewliptak.com and subscribe to his newsletter at https://tinyletter.com/liptakaa.