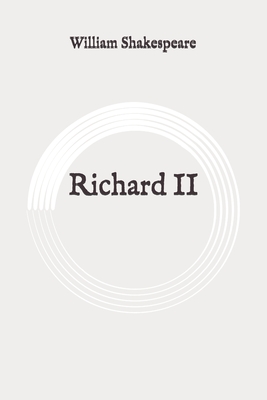 By William Shakespeare
$9.65
Email or call for price

Richard II is one of Shakespeare's finest works: lucid, eloquent, and boldly structured. It can be seen as a tragedy, or a historical play, or a political drama, or as one part of a vast dramatic cycle which helped to generate England's national identity. Today, to some of us, Richard II may appear conservative; but, in Shakespeare's day, it could appear subversive: 'I am Richard II', declared an indignant Queen Elizabeth. Numerous recent revivals in the theatre and on screen have demonstrated the enduring power and poignancy of this drama of the downfall of an egoistic but pitiable monarch.King Richard II banishes Henry Bolingbroke, seizes noble land, and uses the money to fund wars. Henry returns to England to reclaim his land, gathers an army of those opposed to Richard, and deposes him. Now as Henry IV, Henry imprisons Richard, and Richard is murdered in prison. SCENE ILondon. KING RICHARD II's palace. Enter KING RICHARD II, JOHN OF GAUNT, with other Nobles and Attendants]KING RICHARD IIOld John of Gaunt, time-honour'd Lancaster, Hast thou, according to thy oath and band, Brought hither Henry Hereford thy bold son, Here to make good the boisterous late appeal, Which then our leisure would not let us hear, Against the Duke of Norfolk, Thomas Mowbray?JOHN OF GAUNTI have, my liege.KING RICHARD IITell me, moreover, hast thou sounded him, If he appeal the duke on ancient malice; Or worthily, as a good subject should, On some known ground of treachery in him?JOHN OF GAUNTAs near as I could sift him on that argument, On some apparent danger seen in him Aim'd at your highness, no inveterate malice.KING RICHARD IIThen call them to our presence; face to face, And frowning brow to brow, ourselves will hear The accuser and the accused freely speak: High-stomach'd are they both, and full of ire, In rage deaf as the sea, hasty as fire. Enter HENRY BOLINGBROKE and THOMAS MOWBRAY]HENRY BOLINGBROKEMany years of happy days befal My gracious sovereign, my most loving liege THOMAS MOWBRAYEach day still better other's happiness; Until the heavens, envying earth's good hap, Add an immortal title to your crown KING RICHARD IIWe thank you both: yet one but flatters us, As well appeareth by the cause you come; Namely to appeal each other of high treason. Cousin of Hereford, what dost thou object Against the Duke of Norfolk, Thomas Mowbray?HENRY BOLINGBROKEFirst, heaven be the record to my speech In the devotion of a subject's love, Tendering the precious safety of my prince, And free from other misbegotten hate, Come I appellant to this princely presence. Now, Thomas Mowbray, do I turn to thee, And mark my greeting well; for what I speak My body shall make good upon this earth, Or my divine soul answer it in heaven. Thou art a traitor and a miscreant, Too good to be so and too bad to live, Since the more fair and crystal is the sky, The uglier seem the clouds that in it fly. Once more, the more to aggravate the note, With a foul traitor's name stuff I thy throat; And wish, so please my sovereign, ere I move, What my tongue speaks my right drawn sword may prove.THOMAS MOWBRAYLet not my cold words here accuse my zeal: 'Tis not the trial of a woman's war, The bitter clamour of two eager tongues, Can arbitrate this cause betwixt us twain; The blood is hot that must be cool'd for this: Yet can I not of such tame patience boast As to be hush'd and nought at all to say: First, the fair reverence of your highness curbs me From giving reins and spurs to my free speech; Which else would post until it had return'd These terms of treason doubled down his throat.