The Rise of Thomas Paine: and The Case of the Officers of Excise (Paperback) 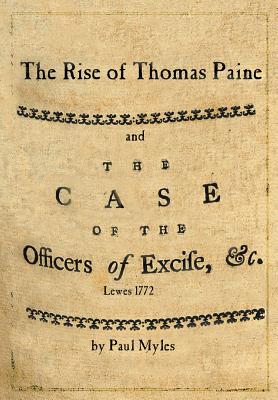 This is the story of how an unknown and lowly Englishman came to be thrust onto the international stage with world-changing effect. While Thomas Paine is known by all Americans as one of their founding fathers, he remains relatively obscure in Great Britain. Thomas Paine's skill as a writer was recognised by George Lewis Scott, a commissioner of Excise, who was at the height of English society. Scott had been trying to reduce the corruption that was endemic in the Excise Service, Paine had suffered it at first hand. This was in 1772 in Lewes, the County town of East Sussex while Paine was still just an outrider of Excise. Paine articulated the argument in his first pamphlet, but despite 4000 copies being printed the four years-long campaign came to nought. It was this effort that exposed the bungling and corrupt ministry and convinced Paine to try his hand in the North American Colonies, which was already aflame from the poor treatment by the United Kingdom. Paine left England with a letter of introduction from Benjamin Franklin. Within a year Paine had written Common Sense, the document that kindled the War of Independence. Paine followed this with 13 Crisis papers that were highly influential in steadying the American troops in the fight against their mother country. This story uses previously unseen documents from the Treasury boxes in the National Archives in Kew. Several strands have been drawn together that show that the United Kingdom was in deep disarray and that it was these factors that drove the emergent United States of America to break free from the United Kingdom.