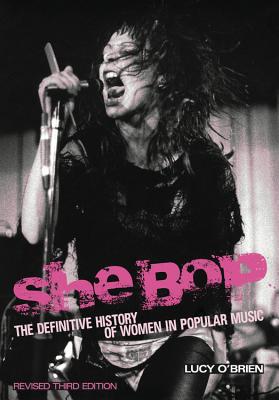 By Lucy O'Brien
Email or call for price.
Out of Print

She Bop is the definitive in-depth study of women in popular music. Drawing on more than 250 firsthand interviews, it covers nine decades of musical history, from ragtime and vaudeville to punk and hip-hop, and features a remarkable cast of trailblazing female performers: Ella Fitzgerald and Madonna, Billie Holiday and Whitney Houston, Dusty Springfield and Beyonce, and many, many more. First published in 1995, She Bop was widely praised as "a contemporary classic" and "a must for any serious muso's bookshelf". It became a key text on numerous university and college courses, and has had a major impact on writing about women in music. To coincide with the second edition, published in 2002, the National Portrait Gallery in London ran a She Bop exhibition of photographs inspired by the book, while BBC Radio 2 broadcast a two-part documentary series of the same name, which was scripted by O'Brien. In recent years there has been an explosion of female artists on the pop scene. Artists like Adele, Amy Winehouse, and Florence Welch have spearheaded a third British Invasion of the US charts, while American acts such as Lady Gaga, Rihanna, and Katy Perry continue to dominate the global market. This revised and expanded third edition brings the story of She Bop into the 21st century, with extensive revisions throughout and a new final chapter covering the current generation of female performers and the ways in which the internet and digital culture have reconfigured the music industry for women.

Lucy O’Brien is a writer, academic, and broadcaster. She is the co-writer of the new memoir by Skin, the lead singer of rock band Skunk Anansie (published in September 2020), and is also the author of Dusty: The Classic Biography, Annie Lennox, and Madonna: Like An Icon, which has been translated into 13 languages. She has contributed to Q, Mojo, The Guardian, The Sunday Times, and The Quietus, and numerous anthologies, such as Mute Records: Artists, Business, History (2018) and Voicing Girlhood In Popular Music: Performance, Authority, Authenticity (2016). She played in all-girl band The Catholic Girls, and is currently working on a memoir about punk and feminism.