I Am the Wind (Oberon Modern Plays) (Paperback) 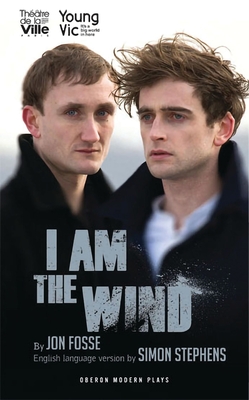 The wind gathers, rising up suddenly.

Two men on a fragile boat, a trip to sea - a few drinks, a bite to eat - when one of them decides to push on to the open ocean. Suddenly there they are: among the distant islands, the threatening fog and gathering swell of the sea, bound together on an odyssey into the unknown. Jon Fosse's work includes novels, poetry, essays and books for children. He is one of the most produced playwrights in Europe and his plays have been translated into forty languages. Oberon Books publishes Nightsongs and The Girl on the Sofa, and his other plays in the following collections: Plays One, Plays Two, Plays Three, Plays Four and Plays Five. Plays Six is forthcoming in 2012. Oberon Books also publishes The Luminous Darkness: The Theatre of Jon Fosse by Leif Zern (translated by Ann Henning-Jocelyn).

Jon Fosse's work includes novels, poetry, essays and books for children. He is one of the most produced playwrights in Europe and his plays have been translated into more than forty languages. Oberon Books publishes Plays One (Someone Is Going to Come, The Name, The Guitar Man, The Child), Plays Three (Mother and Child, Sleep my Baby Sleep, Afternoon, Beautiful, Death Variations), Plays Four (And We'll Never Be Parted, The Son, Visits, Meanwhile the Lights Go Down and Everything Becomes Black), Plays Five (Suzannah, Living Secretly, The Dead Dogs, A Red Butterfly's Wing, Warm, Telemakos, Sleep), Nightsongs, The Girl on the Sofa and I Am The Wind. Fosse was made a Chevalier of the Ordre national du Merite of France in 2007 and received The International Ibsen Award in 2010.

[an] outstanding version This is a high point of the Young Vic’s 40th anniversary season.”The Stage

Fosse jettisons all the conventional rules of drama seems like a meditation on language the play grips because it appeals to something fundamental: it shows two cornered human beings in an extreme situation and demonstrates the power of love. [a] hypnotic production... cryptically haunting” 4 stars Michael BillingtonThe Guardian

[it] exerts a beguiling, hypnotic pull [the [production is] unusual, extraordinary, weird, and beautiful must see” 4 stars - Michael Coveneywhatsonstage.com

Fosse’s subject is the human condition, and this sparsely written play pares down the question of existence to its bare essentials Chéreau’s production is a masterclass in minimalism, perfectionism and maybe a dozen other isms. Who cares? It tells Fosse’s story wonderfully well colloquial and poetic.. Go on, give it a go!”The Arts Desk