Manipulation Tips And Tricks A: A Modern Guide To Master The Art Of Persuasion, Power, Manipulation, Negotiation, Deception, And Psychological Warfare (Hardcover) 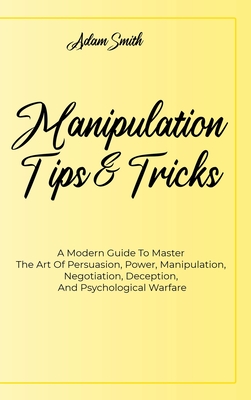 Manipulation is defined as: "the act of causing another person or persons to obey your orders." Manipulation has a lot of different types. Manipulations can be done through physical force (such as keeping someone in a cage until they do something), controlling their mindset (such as talking someone into not doing something), having an emotional attachment (such as threatening someone with finding out their secret if they don't do something) or by using persuasive tactics (such as saying things that make you sound crazy or convincing someone of something not being possible). Manipulations often involve lying, but not always. Manipulations often have the goal of being done to others without their knowledge. However, some manipulators will also do it with their knowledge or desire.

Buy it NOW and get addicted to this amazing book