The Cabin in the Mountains: A Norwegian Odyssey (Paperback) 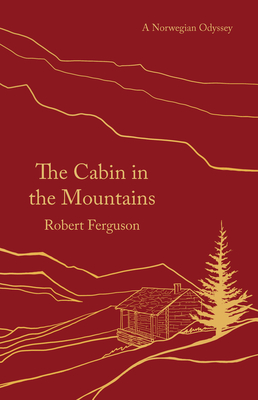 The wooden holiday cabin, or hytte, is a staple of Norwegian life. Robert Ferguson, author of Scandinavians, explores the significance of a national icon in this charming, affectionate history.

Turf-roofed and wooden-built, offering fresh clean air, peace, isolation, and the promise of a day's wood-chopping, hiking, or snow-clearing amid landscapes of great beauty, the hytte—or wooden cabin home—is a crucial part of the national identity of every Norwegian. In 2016, Robert Ferguson and his wife bought a piece of land high up in the Hardangervidda, the plateau that dominates south-central Norway, and on it they built such a hytte.

For Ferguson, the hytte represented the realisation of a dream that first brought him to Norway from England more than thirty years ago. As the cabin takes shape he learns, through conversations with friends and cabin-builders, the cultural history of modern Norway. He learns of the changing traditions attached to these cabin homes for native Norwegians as they try to marry their new-found urban affluence to their past as a tight-knit, impoverished rural community-nation.

Along the way he also describes the intense and mutually rewarding relationship that arose between the colonial Norwegians and their wealthy, imperialist British neighbours across the North Sea in the 19th and 20th centuries; how the British 'salmon-lords' showed them another way of looking at their great rivers, and how English climbers introduced them to a new way of thinking about their mountains.

Robert Ferguson has lived in Norway since 1983. He is the author of Scandinavians: in Search of the Soul of the North, The Hammer and The Cross, and biographies of Ibsen and Henry Miller. He is also the translator of Norwegian Wood by Lars Mytting, which won Non-Fiction Book of the Year 2016.

“A delightfully free-roaming exploration of the myth of the brooding Scandinavian. This isn’t the book to read for glowing paeans to parental leave or foraging chefs; instead, it’s a rarer offering: an engaging, layered look into a complex culture.” —New York Times Book Review (Editors' Choice)


“A delightful book chock-full of surprises, fascinating anecdotes and insights into the region’s rich history and culture.” —Associated Press

“An eye-opening history of a region and culture ‘vibrant with people, noise, chance, life.’ In this valuable study―not merely a recounting of the stereotypes regarding Vikings and their rampaging ways―award-winning writer and translator Ferguson searches for the deepest soul of Scandinavia. Much of this lucid book unfolds like a series of short stories, tales told to Ferguson by friends, literary connections, and even strangers. . . . What Ferguson is really searching for is the essence of their psyche and how the idea of the melancholy, brooding man replaced the specter of the bloodthirsty conqueror. . . . Ferguson astutely examines the idea that history isn’t always what you think it was; it depends on the recorder, and the past can change its shape. A delightful history in which the author truly captures ‘the soul of the North’.” —Kirkus (starred review, best nonfiction books of 2017)

“[An] enormously entertaining, fact-jammed . . . enthralling read . . . For this, Ferguson deserves a medal or two." —The Norwegian American

“A free-wheeling love letter to the essence of Scandinavia . . . Whether he’s waxing poetic about the works and impact of playwright Henrik Ibsen, examining how differently each Scandinavian country acted and reacted during WWII, or contemplating the mystique and strength of Scandinavia’s women, Ferguson combines the factual and the intimate.” —Publishers Weekly

“Ferguson’s stroll through more than one thousand years of Scandinavian history offers an enchanting glimpse into the region’s political, economic, social, and cultural past.” —Booklist (starred review)