Who Killed Berta Caceres?: Dams, Death Squads, and an Indigenous Defender's Battle for the Planet (Hardcover) 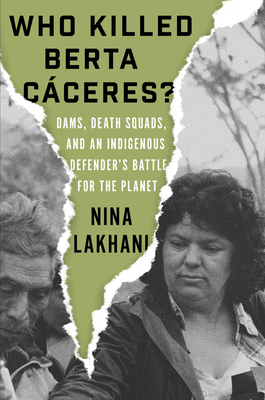 The first time Honduran indigenous leader Berta Cáceres met the journalist Nina Lakhani, Cáceres said, ‘The army has an assassination list with my name at the top. I want to live, but in this country there is total impunity. When they want to kill me, they will do it.’ In 2015, Cáceres won the Goldman Prize, the world’s most prestigious environmental award, for leading a campaign to stop construction of an internationally funded hydroelectric dam on a river sacred to her Lenca people. Less than a year later she was dead.

Lakhani tracked Cáceres remarkable career, in which the defender doggedly pursued her work in the face of years of threats and while friends and colleagues in Honduras were exiled and killed defending basic rights. Lakhani herself endured intimidation and harassment as she investigated the murder. She was the only foreign journalist to attend the 2018 trial of Cáceres’s killers, where state security officials, employees of the dam company and hired hitmen were found guilty of murder. Many questions about who ordered and paid for the killing remain unanswered.

Drawing on more than a hundred interviews, confidential legal filings, and corporate documents unearthed after years of reporting in Honduras, Lakhani paints an intimate portrait of an extraordinary woman in a state beholden to corporate powers, organised crime, and the United States.

NINA LAKHANI has reported from over a dozen countries including six and a half years freelancing in Central America and Mexico, and staff jobs with the Independent and the Independent and Sunday in London. Before journalism she was a mental health nurse. She is currently the Environmental Justice correspondent for the Guardian US based in New York.

“Lakhani’s book meticulously unpicks a Gordian knot of corruption, impunity, and violence, to show how the struggle against the dam is deeply-rooted in historical power dynamics in Honduras.”
—Julia Zulver, openDemocracy

“Nina Lakhani is a brave reporter. She had to be. Since the coup in Honduras, 83 journalists have been killed; 21 were thrown in prison during the period when Lakhani was writing her book. She poses the question ‘would we ever know who killed Berta Cáceres?’ and sets out to answer it.”
—John Perry, Council on Hemispheric Affairs

“Who Killed Berta Cáceres? offers the inside track on a case that is not only emblematic of the struggle for rights and representation in Honduras, but of the global battle for rights and the environment in the face of corrupt governments and irresponsible business.”
—Ben Leather, Global Witness

“Without a doubt, the most comprehensive account of the events which led up to and followed Cáceres murder … It lays bare the facts of the Berta Cáceres case and demands they are faced. In the long struggle against colonial extraction and systematic violence, Who Killed Berta Cáceres? points to the rough road ahead.”
—Harry Holmes, Bright Green

“A powerful indictment of the Honduran justice system and peeling back the mask on how power operates in the country.”
—Alice Stevens, Dublin Review of Books

“Important reporting not just on Cáceres but on the current state of Honduras, a cosseted US ally presided over by a kleptocratic elite, where nearly a third of the population lives on less than $3 a day.”
—Jennie Erin Smith, Times Literary Supplement