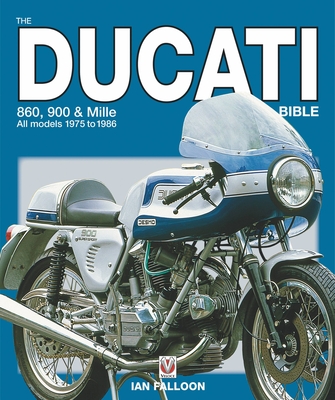 The bevel-drive 860 and 900 was one of the most significant motorcycles of the late 1970s, providing a unique combination of power and handling that was unequalled by other motorcycles at the time.

When Italian car stylist Giorgetto Giugiaro penned the 860GT in 1973, few would have believed it would evolve into one of the greatest Ducati line-ups of all time. The square-case 860 became the legendary 900 Super Sport, the Darmah, and eventually the Mike Hailwood Replica, built to honour Hailwood’s spectacular comeback victory at the Isle of Man in 1978. The square-case Ducati engine design continued for more than a decade, sustaining the company through a downturn in the early 1980s.

The Ducati 860, 900 and Mille Bible covers every incarnation of this great model, from the first 860 through to the final Mille. Illustrated with 200 pictures, and including complete appendices of technical specifications, this book is a must-have for any lover of fine motorcycles.

Ian Falloon brings a wealth of experience to this book; he is the author of numerous publications on motorcycles, many of them Ducati, including The Ducati 750 Bible, The Ducati Monster Bible, Ducati 916, and The Ducati Story (now in it’s 6th edition). He has a small collection of classic sporting motorcycles, including a 1975 Ducati 900 Super Sport.

Ian Falloon was born in New Zealand and studied engineering and music at Victoria University, Wellington. After a motorcycle accident brought an end to his career as a symphony orchestra oboist, he began writing articles about motorcycles for magazines including Classic Bike, Cycle World, Motorcyclist, Two Wheels, Motorcycle Sport, and Australian Motorcycle News. His first book, The Ducati Story, has run to several editions and has been published in three languages. The success of The Ducati Story led to a series of Ducati books and histories of Honda, Kawasaki, BMW, and Moto Guzzi motorcycles including Motorbooks titles The Complete Book of Ducati, The Complete Book of Moto Guzzi, The Complete Book of Triumph Motorcycles, and The Art of Ducati. With an interest and passion spanning decades, Ian now concentrates on collecting and restoring older Italian motorcycles, particularly Ducati, MV Agusta, Laverda, and Moto Guzzi. He lives in Melbourne, Australia, and is ably supported in his projects by his family.