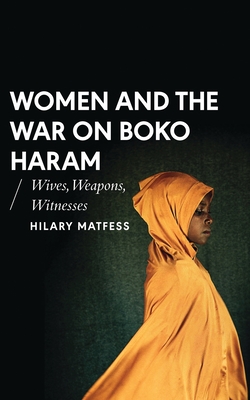 For well over a decade, Boko Haram has waged a campaign of terror across northeastern Nigeria. In 2014, the group shocked the world when it abducted 276 girls en masse from a school in rural Chibok, and the resulting #BringBackOurGirls movement attracted support and solidarity from around the globe. Yet as Hilary Matfess shows, Boko Haram’s campaign of violence against women and girls goes far beyond the Chibok abductions.

From its very inception, argues Matfess, Boko Haram has systematically exploited women to advance its aims, committing acts of sexual violence under the guise of religiously sanctioned marriage. Perhaps more disturbing still, many Nigerian women have chosen to become active supporters of the group, willing even to sacrifice their lives as suicide bombers. Having conducted extensive fieldwork throughout the region, Matfess provides a vivid and thought-provoking account of Boko Haram’s impact on the lives of Nigerian women, as well as exploring how both the Nigerian government and Western leaders have failed to prevent the group’s violent misogyny.

Hilary Matfess is a research analyst based in Washington, DC, and a contributor to the Nigeria Social Violence Project at the Johns Hopkins University School of Advanced International Studies.

“Boko Haram’s violence against women has often been met with incredulous outrage. Matfess cuts through our assumptions to reveal a much more compelling and surprising picture. A fantastic book that I would not hesitate to recommend.”
— Andrew Walker, author of Eat the Heart of the Infidel

“For the first time, women are treated as actors as well as victims within the story of the Boko Haram insurgency. This is a masterpiece which stands to become a classic in the study of militant radicalism.”

“An original, innovative, and much-needed addition to the growing literatures on both women and conflict in Africa and the Boko Haram insurgency.”
— Brandon Kendhammer

“This is a significant book on Boko Haram, analysing the role of women and girls in the insurgency in north-east Nigeria, and the gendered impacts of the enormous humanitarian crisis which the conflict has produced.”
— Adam Higazi, University of Amsterdam

“Provides an important corrective to the general reporting on women associated with Boko Haram. As Matfess persuasively argues, improving the position of women and increasing gender equality in north-eastern Nigeria will surely support efforts to bring peace to the region.”
— Elisha Renne, University of Michigan

“Sharply and sympathetically written. Matfess turns the tables on the notion of women as helpless victims of terror. No doubt, the book’s core argument will raise hackles, but few would disagree that Matfess has laid out a case which demands serious debate.”
— Ebenezer Obadare, University of Kansas

“The author’s intensive fieldwork reveals previously unseen layers of complexity. Matfess is right to conclude the fate of Nigeria is tied to the fate of its women, and her book is an important contribution to that discussion.”
— Valerie Hudson, Texas A&M University

“Understanding gender politics and empowering women are key to solving not just violence in Nigeria but also to stabilizing other post-conflict African and world societies. An important book deserving a wide audience.”
— Choice

“A comprehensive and nuanced discussion of the myriad factors that influence women’s engagement with one of the foremost extremist organisations of the day.”
— Global Discourse

“Those who are trying to find a solution to the civil strife ought to read this book, as should those who are interested in conflict analysis and resolution, as well as post-conflict reconstruction researchers. . . . Very insightful.”
— Human Rights Quarterly

“Relying on a trove of personal interviews with women ensnared in the conflict, Matfess at once debunks popular narratives surrounding Boko Haram and furthers our understanding of how the group functions, particularly in relation to the women caught up in its violence.”
— African Studies Quarterly

“In a thoroughly researched and well-presented book, Matfess goes back in time to unearth the origins of Boko Haram and trace its evolution. In doing so she reveals the grim truth. It takes two to make a fight. The blame can never be laid solely on one side.”
— The Book Owl