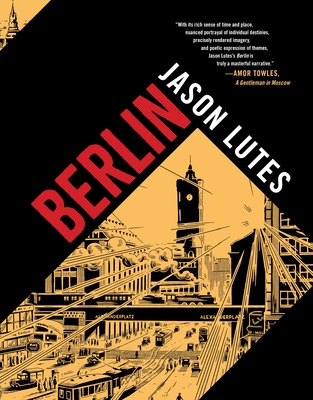 This book. From the first page I was wrapped up in this work of fiction that feels so incredibly real. Lutes's artwork draws you in, but the characters he has created keep you invested in the story - and the history is just so rich and fascinating. I loved it, and any history fan will love it too. - Kari

Best of 2018 nods from the Washington Post, New York Public Library, Globe and Mail, the Guardian, and more!

"The magic in Berlin is in the way Lutes conjures, out of old newspapers and photographs, a city so remote from him in time and space... [Berlin has] an ending so electrifying that I gasped."—New York Times Book Review

During the past two decades, Jason Lutes has quietly created one of the masterworks of the graphic novel golden age. Berlin is one of the high-water marks of the medium: rich in its well-researched historical detail, compassionate in its character studies, and as timely as ever in its depiction of a society slowly awakening to the stranglehold of fascism.

Berlin is an intricate look at the fall of the Weimar Republic through the eyes of its citizens—Marthe Müller, a young woman escaping the memory of a brother killed in World War I, Kurt Severing, an idealistic journalist losing faith in the printed word as fascism and extremism take hold; the Brauns, a family torn apart by poverty and politics. Lutes weaves these characters’ lives into the larger fabric of a city slowly ripping apart.

The city itself is the central protagonist in this historical fiction. Lavish salons, crumbling sidewalks, dusty attics, and train stations: all these places come alive in Lutes’ masterful hand. Weimar Berlin was the world’s metropolis, where intellectualism, creativity, and sensuous liberal values thrived, and Lutes maps its tragic, inevitable decline. Devastatingly relevant and beautifully told, Berlin is one of the great epics of the comics medium.

Jason Lutes is a graduate of the Rhode Island School of Design. He has worked as an art director and editor for various alternative media and comics companies but he's happiest being his own boss. He freelances from his new home in Asheville, North Carolina.

“With its rich sense of time and place, nuanced portrayal of individual destinies, precisely rendered imagery, and poetic expression of themes, Jason Lutes’s Berlin is truly a masterful narrative.”—Amor Towles, A Gentleman in Moscow

“A watershed achievement—Berlin charted new territory for the graphic novel and comics at the same time, at once a story about artists trying to make art during the rise of the Nazis in Germany, and a bildungsroman of the first order. This landmark collection returns this story to us now when we need examples of how to stay human to each other in the face of a politics that turns friends into enemies—a newly necessary book.”—Alexander Chee, The Queen of the Night

“Lutes covers the cabaret scene, the struggles of the press and riots as the Nazis rise, and lives that seemed full of possibility are twisted by the grasping arms of the state… A modern classic.”—The Guardian Best Books of 2018

“Berlin reads like not just a masterwork but also a life’s work.”—The Washington Post, 10 Best Graphic Novels of 2018

““Recommend” isn’t a strong enough verb for conveying how badly you need to read Berlin… The stories that play out between those two bookends sway from the romantic to the apocalyptic and back again, and the intricate linework and oft-mind-blowing layouts are incomparable. For a reader who’s white-knuckling it through our present period of social collapse, Berlin is a beacon of both warning and hope.”—Vulture

“One of the most ambitious, important and fully-realized works of graphic literature yet created, a real masterpiece of both story and art.”—Forbes