Making Maine: Statehood and the War of 1812 (Hardcover) 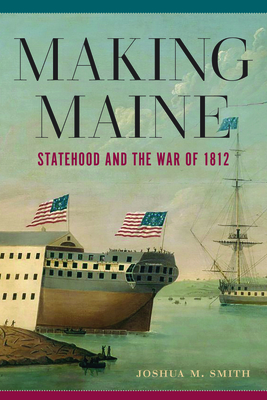 After the Revolutionary War ended, the new American nation grappled with a question about its identity: Were the states sovereign entities or subordinates to a powerful federal government? The War of 1812 brought this vexing issue into sharp relief, as a national government intent on waging an unpopular war confronted a populace in Massachusetts that was vigorously opposed to it. Maine, which at the time was part of Massachusetts, served as the battleground in this political struggle.

Joshua M. Smith recounts an innovative history of the war, focusing on how it specifically affected what was then called the District of Maine. Drawing on archival materials from the United States, Britain, and Canada, Smith exposes the bitter experience of Maine’s citizens during that conflict as they endured multiple hardships, including starvation, heavy taxes, smuggling, treason, and enemy occupation. War’s inherent miseries, along with a changing relationship between regional and national identities, gave rise to a statehood movement that rejected a Boston-centric worldview in favor of a broadly American identity.

“Making Maine is a major contribution to the literature on the War of 1812, linking local and national history with scholarship on the Canadian and British experience. It will shape the historiography of the war going forward.”—Andrew Lambert, author of The Challenge: Britain Against America in the Naval War of 1812

“Based on impressive research, Smith provides a fascinating history of the bitter disputes that bedeviled the prosecution of the war in an area that shared a border with British territory but was politically subordinate to Massachusetts. Making Maine is a significant addition to regional accounts of the War of 1812.”—J. C. A. Stagg, author of The War of 1812: Conflict for a Continent