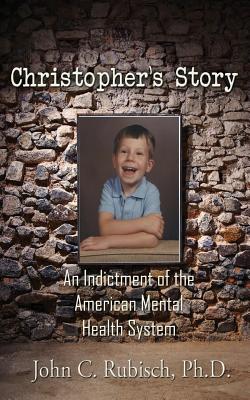 A physically abused boy with emotional problems is adopted at the age of three. Despite the best efforts of his father to assist him, the boy enters the perpetual dysfunction of the American mental health system and continues in a downward spiral from childhood to young adulthood until the cycle of physical abuse come full circle with tragic outcomes for both the boy and a new-born infant.

Part biography, part social commentary, and part cold case, a compelling tale of the author's descent into his son's problems and the madness of the perpetual dysfunction of the country's mental health system. There is an astonishing level of detail taken from reports, evaluations, and the author's own journal entries, as he records his frustration, heartbreak, as well as a fair amount of humor. The MH system appears as bureaucratic maze of incompetence and callousness more interested in collecting insurance payments and protecting itself from liability than in assisting others. The failure of the system in the case of the author's son has disastrous results. Physically abused at the age of one and a half by his own biological father, the subject of this book commits physical abuse to an infant twenty-one years later with fatal consequences. And just when readers have thought it couldn't get any worse, there is a twist at the end that is beyond belief.

Staring when the boy was four, the author writes of his efforts to raise his son by himself. It is clear from the beginning that Christopher has emotional problems, and the author seeks help. However, the boy is continuously misdiagnosed as ADHD with the solution being to try another medication. Indications that the boy is brain-damaged are ignored for many years. In school learning takes a back seat to behavior management. Adolescence brings violence, substance abuse, inappropriate sexual advances, and turns in and out of placements. At a crucial stage where both father and son are pleading for help, the MH system does not even return phone calls.

Throughout the emphasis is on the failure of the MH system rather than the possible shortcomings of individuals. Pseudonyms are used to maintain the focus on the system.

The author concludes by citing crucial points in his son's life were opportunities for interventions were missed. He also cites long standard practices in the MH field that deflect accountability and keep the system inefficient. Recommendations for changes in the system are made. In the book's final passage, the author citing a case of a student in the last year in which the recommendations by the MH system are totally inappropriate for the student.

About the author: John Rubisch has over thirty years of experience with the American mental health system as a counselor, social service worker, and parent. He holds a PhD in Instructional Systems from the Pennsylvania State University. He is the author of Mill River Junior High and has been published many times in journals, magazine and newspapers on a variety of topics.