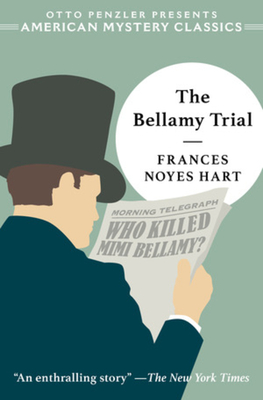 By Frances Noyes Hart, Hank Phillippi Ryan (Introduction by)
$15.95
On Our Shelves Now

A murder trial scandalizes the upper echelons of Long Island society, and the reader is on the jury…

The trial of Stephen Bellamy and Susan Ives, accused of murdering Bellamy’s wife Madeleine, lasts eight days. That’s eight days of witnesses (some reliable, some not), eight days of examination and cross-examination, and eight days of sensational courtroom theatrics lively enough to rouse the judge into frenzied calls for order. Ex-fiancés, houseworkers, and assorted family members are brought to the stand—a cross-section of this wealthy Long Island town—and each one only adds to the mystery of the case in all its sordid detail. A trial that seems straightforward at its outset grows increasingly confounding as it proceeds, and surprises abound; by the time the closing arguments are made, however, the reader, like the jury, is provided with all the evidence needed to pass judgement on the two defendants. Still, only the most astute among them will not be shocked by the verdict announced at the end.

Inspired by the most sensational murder trial of its day, The Bellamy Trial is a pioneering courtroom mystery, and one of the first of such books to popularize the form. It is included in the famed Haycraft-Queen Cornerstone list of the most definitive novels of the mystery genre.

Frances Noyes Hart (1890-1943) was an American writer whose stories were published in Scribner’s, The Saturday Evening Post, where The Bellamy Trial was first serialized, and The Ladies’ Home Journal. The daughter of Frank Brett Noyes, founder of the Associated Press, Hart was educated in American, Italian, and French schools before serving in WWI as a canteen worker for the YMCA and as a translator for the Naval Intelligence Bureau. After returning home, she wrote six novels, numerous short stories, and a non-fiction memoir about the war.

Hank Phillippi Ryan is the bestselling author of eleven novels, including psychological thrillers Trust Me and The Murder List. A past president of national Sisters in Crime, Ryan’s suspense fiction has won the Mary Higgins Clark Award, five Agatha Awards, and numerous other accolades. Alongside her work as an author, Ryan also has a successful career as an investigative reporter at Boston’s WHDH-TV, where her ground-breaking journalism has been celebrated with 36 EMMY Awards and 14 Edward R. Murrow Awards.

An ingenious and spirited
job, which has clever characterization, strong suspense and real comic relief.
The mystery is capitally created and sustained.
— New York Evening Post

Masterful . . . add this fine reissue of The Bellamy Trial to your reading list. It’s remarkably written, it’s carefully crafted, and it’s more than worthy of your time and interest.
— New York Journal of Books