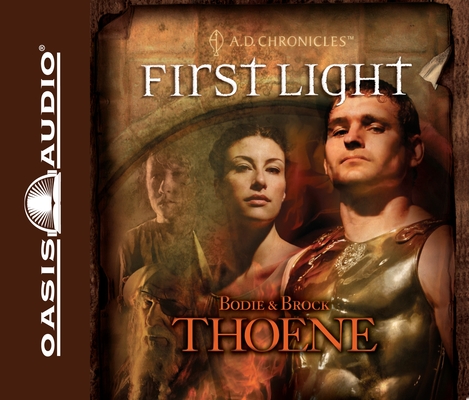 This is book number 1 in the A.D. Chronicles series.

This first audio book in the A.D. Chronicles series will bring you face-to-face with the man called Yeshua.  Go back in time to first-century Jerusalem. It's a dark time in the world's holiest and most turbulent city. Walk with Peniel, the blind beggar who longs for rescue from his suffering. Peek into the lives of Susannah and Manaen, two lovers separated by overwhelming odds. And meet an unusual healer, who ignites a spark of controversy in the fire of hatred, deceit, and betrayal that is always burning in this ancient city.

Bodie and Brock Thoene (pronounced Tay-nee) have written over 45 works of historical fiction.  That these best sellers have sold more than 10 million copies and won eight ECPA Gold Medallion Awards affirms what millions of readers have already discovered - the Thoenes are not only master stylists, but experts at capturing readers' minds and hearts.  Bodie and Brock have four grown children - Rachel, Jake, Luke, and Ellie - and five grandchildren.  Bodie and Brock divide their time between London and Nevada.

"Sean Barrett depicts multiple emotions—especially fear, passion, and excitement—in a wide array of characters. The story begins in modern-day Israel and then moves to Palestine during the time of the New Testament. The harrowing story of Peniel, a beggar blind from birth, is fraught with excitement as he yearns for the Messiah to come and bring peace. Suspense and romance also play a part in this wonderful story, the first of 10 in the A.D. Chronicles series. Barrett adds just the right touches of drama to keep one glued to one’s earphones."
N.L.  Winner of AudioFile Earphones Award - © AudioFile Portland, Maine