Full-Rip 9.0: The Next Big Earthquake in the Pacific Northwest (Paperback) 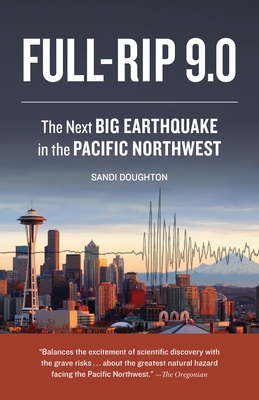 Scientists have identified Seattle, Portland, and Vancouver as the urban centers of what will be the biggest earthquake—the Really Big One—in the continental United States. A quake will happen—in fact, it’s actually overdue. The Cascadia subduction zone is 750 miles long, running along the Pacific coast from Northern California up to southern British Columbia.

In this fascinating book, The Seattle Times science reporter Sandi Doughton introduces readers to the scientists who are dedicated to understanding the way the earth moves and describes what patterns can be identified and how prepared (or not) people are. With a 100% chance of a mega-quake hitting the Pacific Northwest, this fascinating book reports on the scientists who are trying to understand when, where, and just how big The Big One will be.

Sandi Doughton writes about science for The Seattle Times and has been a journalist for twenty years covering environment, science, health, and medicine. She lives in Seattle.

“More than just a dire warning about the “big one”…[Full Rip 9.0] renders the remarkable story of how geologists and other scientists have pieced together evidence of an immense Northwest “megaquake”…[Full Rip 9.0] may make you a little jittery (and cause you to re-evaluate your family’s earthquake readiness), but it is a captivating read even as it challenges long-held assumptions — including the firmness of the ground under your feet.
The Seattle Times

"Written by Seattle Times science writer Sandi Doughton, the book is a hard, fast and compelling look at the potential impact The Big One might have on us, and it documents the detective work being done by researchers who are trying to nail down the shifting tectonic structures below. It’s recommended beach reading, as long as you know your tsunami evacuation route."
Knute Berger, Seattle magazine

"[If you want] to know more about our region's history, seismic or otherwise, to say nothing of your odds of being squashed by a pancaking viaduct or a washed away by a monster tsunami, order yourself a copy of Doughton's book."
Dan Savage, The Stranger

"'Full Rip 9.0' is a worthy addition to the small shelf of books about the greatest natural hazard facing the Pacific Northwest. Doughton balances the excitement of scientific discovery with the grave risks that recent findings have revealed. Every Oregonian should learn and heed this Cascadia story.
The Oregonian

"Full Rip is a short, alarming read. ...the subject carries more than enough natural interest for Seattle residents that they'll paw through this book feverishly."
The Stranger

"...the most readable [Pacific Northwest earthquake] telling so far."
The Portland Mercury

"Seattle Times reporter Sandi Doughton draws the reader into in-depth science—science that says it’s a matter of if, not when, a big quake will strike—with vivid stories of the scientists behind the data. ...From the schools that will be shaken to the leaky tanks and Columbia Generating Station nuclear plant at Hanford that will feel the earth move, Full Rip 9.0 is terrifying in its implications, yet an entertaining summer read."
Eugene Weekly

"Restocking my family's emergency preparedness kit zoomed to the top of my to-do list this week, after I read 'Full Rip 9.0.' Seattle science reporter Sandi Doughton has written this alarming assessment of our region's seismic activity throughout history and uses the latest scientific research to speculate on what we might expect in the future."
The Bellingham Herald

"Full Rip 9.0 by Sandi Doughton is a compelling story about historic mega earthquakes along the Pacific Coast from northern California to southern British Columbia."
The Christian Science Monitor

"Doughton’s story focuses on the geological record and its implications for the Northwest. Does the region face an offshore mega-quake and tsunami on the scale of Japan’s 3/11/11 event that will kill thousands and devastate the economy, or a series of magnitude 8 offshore quake and tsunami events that will cumulatively be nearly as devastating?"
The SunBreak

"In this fascinating book, The Seattle Times science reporter Sandi Doughton introduces readers to the scientists who are dedicated to understanding the way the earth moves and describes what patterns can be identified and how prepared (or not) people are. With a 100% chance of a mega-quake hitting the Pacific Northwest, this fascinating book reports on the scientists who are trying to understand when, where, and just how big THE BIG ONE will be... If you live in this region, you should read this book!"
Birdbooker Report