Moanin' at Midnight: The Life and Times of Howlin' Wolf (Paperback) 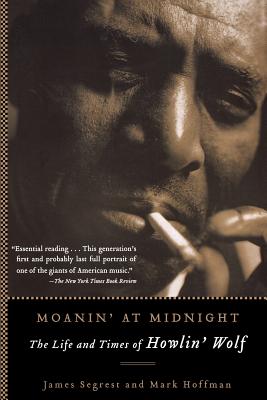 One of the greatest artists the blues ever produced, Howlin' Wolf was a musical giant in every way. He stood six foot three, weighed almost three hundred pounds, wore size sixteen shoes, and poured out his darkest sorrows onstage in a voice that captured all the pain of growing up black and poor in Jim Crow Mississippi. Half a century after his first hits, his sound still terrifies and inspires. Wolf began his career singing with the first Delta blues stars, was present at the birth of rock 'n' roll in Memphis, and vied with rival Muddy Waters for the title of king of Chicago blues.

This new and revised edition is full of harrowing anecdotes about his early years, entertaining stories about his decades at the top, and never-before-seen photographs of the artist onstage. An essential volume for Wolf's legions of fans, lovers of blues, and anyone interested in the history of American music.

James Segrest has written for Blues Access magazine and cowrote the liner notes for the Grammy-nominated album A Tribute to Howlin' Wolf. He lives in Alabama.

Mark Hoffman has written for Blues Access, Living Blues, and Blues to Do magazines and narrated the prizewinning film The Howlin' Wolf Story. He lives on an island near Seattle.

"Essential reading . . . This generation's first and probably last full portrait of one of the giants of American music."--The New York Times Book Review