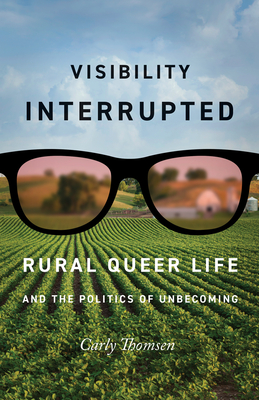 Today most LGBTQ rights supporters take for granted the virtue of being “out, loud, and proud.” Most also assume that it would be terrible to be LGBTQ in a rural place. By considering moments in which queerness and rurality come into contact, Visibility Interrupted argues that both positions are wrong. In the first monograph on LGBTQ women in the rural Midwest, Carly Thomsen deconstructs the image of the rural as a flat, homogenous, and anachronistic place where LGBTQ people necessarily suffer. And she suggests that visibility is not liberation and will not lead to liberation.

Far from being an unambiguous good, argues Thomsen, visibility politics can, in fact, preclude collective action. They also advance metronormativity, postraciality, and capitalism. To make these interventions, Thomsen develops the theory of unbecoming: interrogating the relationship between that which we celebrate and that which we find disdainful—the past, the rural, politics—is crucial for developing alternative subjectivities and politics. Unbecoming precedes becoming. Drawing from critical race studies, disability studies, and queer Marxism, in addition to feminist and queer studies, the insights of this book will be useful to scholars theorizing issues far beyond sexuality and place and to social justice activists who want to move beyond visibility.

Carly Thomsen is assistant professor of gender, sexuality, and feminist studies at Middlebury College. She directed and produced In Plain Sight, a documentary short that extends the arguments of this book.

"Carly Thomsen’s Visibility Interrupted is a must-read for any LGBTQ (loving) people who have ever thought that being 'out, loud, and proud' was a good thing. Disclosing how visibility politics emerges out of urban spaces and presumes that the rural is unbecoming, Thomsen goes on to demonstrate what women in rural South Dakota and Minnesota can teach us about LGBTQ politics, the rural, and the relation between the two. Provocative, extensively researched, and delivered in Thomsen’s lively voice, this groundbreaking ‘queer archive’ offers a new understanding of sexuality as spatial and a more capacious politics inspired by LGBTQ rural life."—Rosemary Hennessy, Rice University

"Visibility Interrupted advances research and energizes debate in an emergent and under-examined area in LGBTQ studies: queer rurality. Not only does this work critique dominant queer metronormativity in the field, it also critically displaces the strongly masculinist conception of the bucolic and the rustic by focusing on LGBTQ women’s identity formation, world-making processes, and community-building practices in the rural Midwest. Carly Thomsen argues for complicating the queer rural Midwest and queerness in general by offering a critical optic that refuses the flattening of the pastoral and envisions alternative formations of LGBTQ future."—Martin F. Manalansan IV, University of Minnesota, Twin Cities

"Despite decades of critique of visibility politics, the rural continues to persist as an inherently oppressive space for queers. This is an energizing read, both as a synthesis of these debates as well as a fresh take on the suturing of LGBTQ visibility to hegemonic constructs of race and capitalism. Uninterested in a politics of inclusion, Carly Thomsen artfully situates visibility as a form of labor—the work of producing and curating oneself inevitably for capitalism and for the state—that is unappealing and unnecessary for her rural lesbian interlocutors. Visibility therefore becomes a political aim that preempts other horizons of political action. Anchored in the growing scholarship on rural queer studies, Visibility Interrupted is also a major contribution to queer and feminist theory, critical race studies, and critical disability studies. The thought-provoking stories of these irreverent lesbians reveal the imaginative paucity at the heart of urban metronormative sexual cultures."—Jasbir K. Puar, Rutgers University