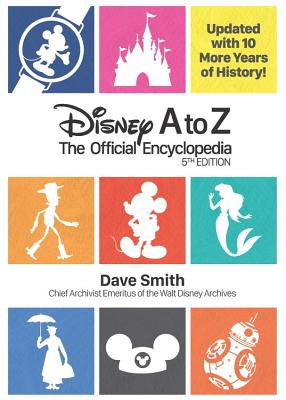 If you�re curious about The Walt Disney Company, this comprehensive encyclopedia is your one-stop guide!

Filled with significant achievements, short biographies, historic dates, and tons of trivia-worthy tidbits and anecdotes, this newly updated collection covers all things Disney�from A to Z�through thousands of entries and more than eight hundred images.

The fifth edition includes all the major Disney park attractions, restaurants, and shows; summaries of ABC and Disney television series; run-downs on all Disney and Disney-Pixar films and characters; the latest and greatest from Marvel and Lucas; key actors, songs, and animators from Disney films and shows; and so much more!

Searching for that perfect gift for the #1 Disney fan in your life? Explore more behind-the-scenes stories from Disney Editions:

In addition to founding the Walt Disney Archives in 1970 and serving as chief archivist for more than forty years, Disney Legend Dave Smith was a featured speaker at many Disney events.

Beginning with the July 1983 issue of Disney Channel Magazine, Dave began answering Disney trivia questions from viewers of the Disney Channel. In the ensuing thirty years, his "Ask Dave" column has continued through multiple publications, including Disney Magazine, the online Disney Insider, the D23 Web site, and his question-and-answer books Disney Trivia from the Vault: Secrets Revealed and Questions Answered and Disney Fact Revealed: Answers to Fans' Curious Questions.

Dave also coauthored all volumes of The Ultimate Disney Trivia Book 1�4 and Disney: The First 100 Years (and its update.) He compiled The Quotable Walt Disney, as well as all editions of Disney A to Z. He was honored as a Disney Legend in 2007.

PRAISE FOR DISNEY A TO Z: THE OFFICIAL ENCYCLOPEDIA"An update to the previous edition and it's quite an update. In fact, more than 10 years of Disney history has been added to the book. Now covering from the creation of Mickey Mouse to the opening of the Shanghai Disney Resort, the book has approximately 8,000 entries and more than 800 photographs. This is a comprehensive book that even the hardcore Disney fan will learn a thing or two."—<strong>Huffington Post</strong>

PRAISE FOR DISNEY A TO Z: THE OFFICIAL ENCYCLOPEDIA"In the late '60s, while working on a bibliography on Walt Disney, Dave heard that The Walt Disney Company was considering establishing an Archive and wrote a letter to the Disney Company offering his services. The rest is Disney history! Apart from his huge contribution, through his work at the Archive, to preserving the history of Disney?s contribution to film and animation, Dave disseminated much of that story through his many books, including Disney A to Z (going through numerous editions), The Quotable Walt Disney, Disney: The First 100 Years, Disney Facts Revealed, his multi-volume The Ultimate Disney Trivia Book, and many other books, articles, and contributions to other publications."—<strong>Brian Sibley</strong>, writer, broadcaster, and Disney scholar

PRAISE FOR DISNEY A TO Z: THE OFFICIAL ENCYCLOPEDIA"It hardly seems possible that anything has been left out. Each of the 128 Donald Duck cartoons is described; the voices of the cartoon characters are identified; the tale of how Mortimer came to be called Mickey is related; and a selected bibliography is included, going back to 1942 books."—<strong>Publishers Weekly</strong>

PRAISE FOR DISNEY A TO Z: THE OFFICIAL ENCYCLOPEDIA"Smith was hired in 1970 by Walt Disney?s brother, Roy O. Disney. His first job was to catalogue every item in Walt Disney?s executive suite at the Burbank studio, a space that had been left untouched after Walt Disney?s death in December 1966. Smith?s work allowed the company to recreate Walt?s office for an installation built in 2015 to help inspire Disney?s contemporary workforce. Smith was a prolific author of books about Walt Disney Co., including the company?s official encyclopedia Disney A to Z."—<strong>Variety</strong>

PRAISE FOR DISNEY A TO Z: THE OFFICIAL ENCYCLOPEDIA"Smith, founder of the Disney Archives . . . has crafted a trivia-seekers' treasure. For most public and academic collections in the performing arts."—<strong>Library Journal</strong>

PRAISE FOR DISNEY A TO Z: THE OFFICIAL ENCYCLOPEDIA"The reference book sets the record straight on many Disney-related issues, and has become a research tool for reporters and others who write about the company."—<strong>Los Angeles Times</strong>