John Prine: In Spite of Himself (American Music Series) (Paperback) 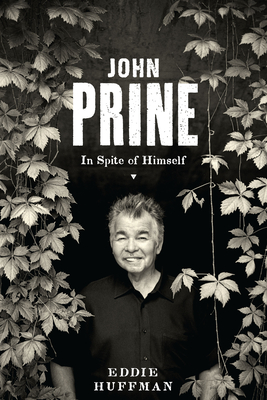 By Eddie Huffman
Email or call for price.
Out of Print

With a range that spans the lyrical, heartfelt songs “Angel from Montgomery,” “Sam Stone,” and “Paradise” to the classic country music parody “You Never Even Called Me by My Name,” John Prine is a songwriter’s songwriter. Across five decades, Prine has created critically acclaimed albums—John Prine (one of Rolling Stone’s 500 Greatest Albums of All Time), Bruised Orange, and The Missing Years—and earned many honors, including two Grammy Awards, a Lifetime Achievement Award for Songwriting from the Americana Music Association, and induction into the Nashville Songwriters Hall of Fame. His songs have been covered by scores of artists, from Johnny Cash and Miranda Lambert to Bette Midler and 10,000 Maniacs, and have influenced everyone from Roger McGuinn to Kacey Musgraves. Hailed in his early years as the “new Dylan,” Prine still counts Bob Dylan among his most enthusiastic fans.

In John Prine, Eddie Huffman traces the long arc of Prine’s musical career, beginning with his early, seemingly effortless successes, which led paradoxically not to stardom but to a rich and varied career writing songs that other people have made famous. He recounts the stories, many of them humorous, behind Prine’s best-known songs and discusses all of Prine’s albums as he explores the brilliant records and the ill-advised side trips, the underappreciated gems and the hard-earned comebacks that led Prine to found his own successful record label, Oh Boy Records. This thorough, entertaining treatment gives John Prine his due as one of the most influential songwriters of his generation.

Eddie Huffman, a regular contributor to the Greensboro (NC) News & Record and the Winston-Salem (NC) Journal, has written for Rolling Stone, the New York Times, Utne Reader, All Music Guide, Goldmine, the Virgin Islands Source, and many other publications.

This book provides behind-the-scenes history of the music industry and engaging anecdotes about musicians, writers and actors, some with whom Prine only rubbed shoulders, and others with whom he built life-long friendships.
— No Depression

The unlikely success of the reluctant performer makes for fascinating reading.
— Kirkus Reviews

Weaving well-known biographical details (Prine was a mail carrier in Chicago when he got his start) into meticulous sketches of the making of each album—and reviews of those albums—Huffman offers an admiring portrait of an often restless though always canny songwriter... Huffman’s book will make us want to pick up Prine’s albums and listen to them once again or for the first time.
— Publishers Weekly

An excellent new biography by Eddie Huffman.
— The Telegraph (UK)

North Carolina music journalist Eddie Huffman wrote the first-ever biography of Prine that traces the musician from his family roots in Kentucky through struggles with alcohol and cancer in his adult life, to where he stands in the music scene today.
— The State of Things - WUNC

...an entertaining and worthwhile read for anyone looking for an introduction to the music of the singing postman.
— Rebeat

I started, with high hopes, to read Huffman’s book. I wasn’t disappointed . . . This veteran music journalist knows how to write.
— Winston-Salem Journal

…provid(es) insight into the singer's most significant musical works…Huffman does a good job of conveying his subject’s personality, motivations, and ambitions, and he fills the narrative with humor, mostly by quoting Prine himself.
— A. C. Shahriari, Kent State University

...a revealing 2015 biography of the acclaimed mailman-turned-singer-songwriter...
— The Washington Post