A Bitter Pill: A doctor’s insight into medical corruption (Paperback) 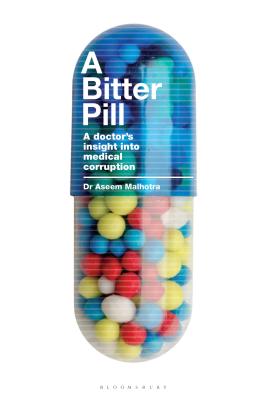 By Dr Aseem Malhotra
Email or call for price.
Subject to Availability

Global health systems are forecast to collapse in the next few years. Two things are driving ever-increasing demand. The first is the escalating burden of chronic disease, caused by entirely preventable lifestyle related illnesses. The second is over treatment. Millions of people are taking drugs and undergoing tests and operations that will give them no benefit and they don't even know it--not because we don't have the scientific evidence but because it's being sequestered from them.

Collusion between doctors, politicians, respected medical institutions, 'charities' and medical journals, for financial gain, has resulted in an epidemic of misinformation with devastating consequences for our health worldwide.

This is the story of the author's own first-hand experience in not only discovering the truth behind our health (including his own) but taking on and exposing the manipulations of those vested interests that are benefiting from an increasingly fat and sick society. This story will also expose the attempts to silence those who call for greater transparency, including the author's own experience of personal attacks and attempts to destroy his career.

The system is broken. Dr. Malhotra's mission is to fix it!

Dr Aseem Malhotra MBChB, MRCP, Consultant Cardiologist is one of the most outspoken cardiologists in the UK. He is currently successfully leading a campaign against excess sugar consumption as a founding member of the group Action on Sugar. The award winning cardiologist and honorary NHS consultant has successfully motivated leading academics, the media and politicians to make sugar reduction a health priority in the UK--by publishing commentaries in the BMJ and mainstream media.

When he is not working as a doctor in the NHS and seeing patients privately in Harley Street, Aseem concentrates on raising the public awareness about the health benefits of a sugar-free diet--maintaining that sugar deserves its reputation as "public health enemy number 1." His no-holds-barred approach to challenging common health beliefs is proving effective in getting health and medical professionals and authorities from around the world to sit up and take notice. He is regularly invited to speak at national and international conferences.

He has become one of the most influential and effective campaigning doctors in the world on issues that affect obesity, heart disease, and population health.