The Last Hurrah: The 1947 Royal Tour of Southern Africa and the End of Empire (Hardcover) 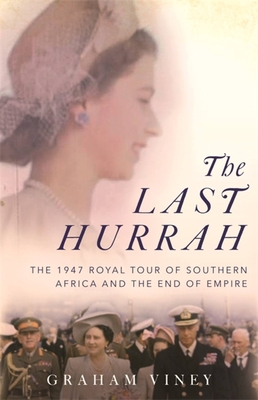 By Graham Viney
Email or call for price.
Out of Print

The Last Hurrah captures in vivid detail the 1947 royal tour of southern Africa, both the high-water mark of the British Empire and the very moment at which it began to unravel. It is also an intimate, revealing portrait of the royal family - King George VI, Queen Elizabeth and the Princesses Elizabeth and Margaret - hard at work in the national interest, and succeeding triumphantly against all odds.

The year 1947 was a pivotal moment not just in the history of the Union of South Africa, but of the British Empire itself. Later that same year India gained independence and just one year later the Afrikaner Nationalist victory in South Africa would lead inexorably to the Republic of South Africa in 1961 and its departure from the Commonwealth.

Graham Viney's book not only superbly captures a moment in the life of a fractious, recently formed 'nation', before its descent into over three decades of darkness, but also gives us an intimate and revealing portrait of the royal family. The present Queen Elizabeth must have learned a great deal about statecraft from her father, and about duty, tact and hard work from both her parents in the course of this three-month tour, during which the then princess celebrated her twenty-first birthday. It was also the family's first real experience of multiculturalism.

The royal family travelled ceaselessly, from February to April, on a specially commissioned, white-and-gold train, meeting thousands of people at every stop along the way. The tour was a show of imperial solidarity and a recognition of South Africa's contribution to the Allied cause during the Second World War, specifically that of South African prime minister Jan Smuts, who had served in both British war cabinets.

The Last Hurrah draws skilfully on many diverse sources, including the Royal Archive at Windsor, and includes many photographs of the royal family not previously published, including stills from film footage unearthed in the South African Railway Museum archives.

GRAHAM VINEY was educated at the Diocesan College (Bishops), Cape Town, and Oxford University where he read International Relations. He runs an international design company, and, in addition to numerous papers and articles has written two books, Colonial Houses of South Africa and The Cape of Good Hope, 1806-1872.

A colourful and entertaining socio-political account of the royalt tour that transfixed South Africa.—Richard Steyn, author of Jan Smuts: Unafraid of Greatness and Louis Botha: A Man Apart

Brilliantly conveys the glamour and gruelling nature of a tour that temporarily united a divided nation, but ultimately failed to embed South Africa within "a Commonwealth of free peoples and many races". Casting a discerning eye on his royal protagonists and the people they encountered, Viney penetrates beyond the frippery and froth to provide fascinating sidelights on the history of twentieth-century South Africa—Lady Anne Somerset, author of Elizabeth I and Queen Anne

Brilliantly conveys the glamour and gruelling nature of a tour that temporarily united a divided nation, but ultimately failed to embed South Africa within "a Commonwealth of free peoples and many races". Casting a discerning eye on his royal protagonists and the people they encountered, Viney penetrates beyond the frippery and froth to provide fascinating sidelights on the history of twentieth-century South Africa

Graham Viney offers a dual feat: opening out from the popular spectacle of the Royal tour to a critical moment in English history. This book brings to life both the bonds of empire and its end, and has the breath of the past in the detail: the way people dressed to depart on the white train; the Queen's disarming reply to an old fighter unwilling to forgive England for the Boer War; the family appeal overcoming Afrikaner suspicions of snootiness; and the smells of the time: acrid railway engine smoke, stoep polish and teatime silver in the sun. This is a layered book, written with insight into the disparate views of Blacks, Indians, Coloureds, the party led by Smuts and the proponents of apartheid lurking in the wings. This is an appealing story of a might-have-been, the apparent success of the Royals in bringing a divided country together but, in the end, a success that could not change votes, dominated by racial issues. The Last Hurrah is a superb achievement, graceful, readable, deeply researched and enhanced by rare photographs.—Lyndall Gordon, author of The Imperfect Life of T. S. Eliot and Outsiders

Meticulously researched, and inspiringly evoked, Graham Viney relates the story of the 1947 Royal Tour of South Africa, and in so doing captures a defining moment in the history of the South African nation.—Hugo Vickers

For me, this was the literary surprise of the decade, to be so moved and enlightened by a book about British royals and their 1947 tour of South Africa. In Viney's hands, this . . . turns into an unforgettable excursion into a world peopled by gracious blue bloods, lovely princesses, bowing colonials and great throngs of Boers and Africans, inexplicably cheering the rulers of a kingdom that had subjugated their ancestors. Bathed in the fading glow of empire and buffeted by the coming storm of political struggle, Viney's South Africa is a country most of us will barely recognise, teetering on the brink of tumultuous change and yet almost united, at least for a moment, by love for a king and queen who weren't really ours. This is a very fine book. It deserves readers.—Rian Malan, author of My Traitor's Heart