Self-Sufficiency for the 21st Century: The Complete Guide to Sustainable Living Today (Hardcover) 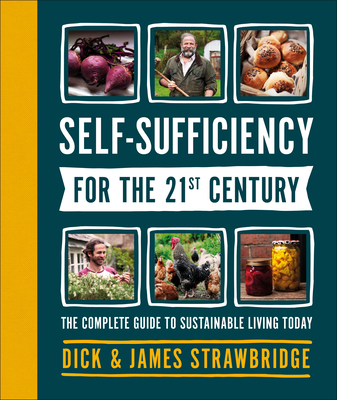 Find your route to a more sustainable lifestyle with Dick Strawbridge and his son, James.

We can all take steps to reduce our carbon footprint and be more self-sufficient. For some, that might mean heading to the countryside to live off the land. For the rest of us, the reality might involve smaller, but no less important, lifestyle changes: cutting back on plastic or food waste, growing vegetables, preserving meat and fish, preparing jams and chutneys, baking sourdough bread, making your own plant-based milk, or keeping a chicken or two.

Dick and James Strawbridge know what it's like to make these changes. Between them, they've lived on a smallholding, in a terraced house, and even a chateau. In this updated edition of Self-Sufficiency for the 21st Century, they share everything they've learned and give you the tools you need for a more rewarding and environmentally conscious life.

Dick Strawbridge, a retired lieutenant colonel and former army engineer, has always been fascinated by how things work. His desire to lead a greener life led him to put his practical and leadership skills to use in converting New House Farm in Cornwall into an ecologically friendly, but completely modern, place to live. The family's journey to a sustainable, self-sufficient lifestyle was documented in the BBC series It's Not Easy Being Green, which ran for three seasons. Dick cowrote the previous edition with his son, and is also the author of It's Not Easy Being Green (BBC Books, 2009). His most recent TV project is the BBC series Escape to the Chateau (March 2018), now in its fifth season, which has been renewed for another season in 2019.

James Strawbridge, Dick's son, has inherited his father's enthusiasm for inventing and DIY, and cohosted It's Not Easy Being Green. After cowriting the previous edition of Self-Sufficiency for the 21st Century and It's Not Easy Being Green, James and his father hosted other popular series, including The Hungry Sailors (ITV 2012, 2013) and Saturday Farm (ITV 2013). James has also cowritten a series of books on artisan crafts, preserving food, and traditional skills: Made at Home (Octopus, 2012). He currently lives in Cornwall.