Becoming a Somebody: The Biography of Ignat Kaneff (Hardcover) 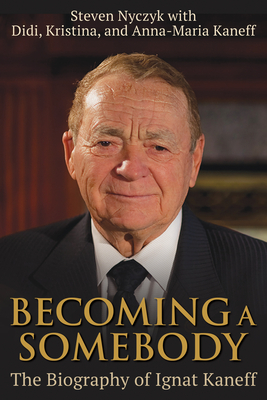 The fascinating life story of Ignat Kaneff, one of Canada's leading builders.

When Ignat Kaneff arrived in Canada in 1951, he had five dollars to his name, spoke no English, and had very little education. Yet, this was the beginning of one of Canada's great immigrant success stories. Having left his native Bulgaria at just fourteen, Kaneff's journey to Canada was long. It even included a decade spent in wartime Germany, working as a market gardener, before his journey led him to Canada.

Kaneff began working in Toronto's construction industry, where he showed tremendous drive, quickly founding a company and breaking ground on his first subdivision in the early 1950s. He continued on a trajectory toward success, and by the 1970s was ranked among Canada's top businessmen. Considered a pioneering citizen of the City of Mississauga, in 2017 he was inducted as a Member of the Order of Canada. Becoming a Somebody recounts his stunning rise to prominence.

Steven Nyczyk has been writing professionally for nearly twenty years. He has written for the Toronto Sun and crafted teleplays for various Canadian television programs. Steven lives in Toronto. Anna-Maria Kaneff is the executive vice-president of the Kaneff Group of Companies. She is a past ROM Governor, former director of the Credit Valley Hospital Foundation, and founding director of the Grassroots Reconciliation Group, a Ugandan non-profit. Anna-Maria lives in Mississauga with her husband and two children. Kristina Maria Kaneff is vice-president and general counsel of the Kaneff Group of Companies. She is president of the Ignat Kaneff Charitable Foundation, Circle Leader for Peacebuilders International, and a director of NATO Association of Canada. Kristina Maria lives in Mississauga. Didi Kaneff, is the president of the Kaneff Group of Companies. She is a recipient of the Queen Elizabeth II Diamond Jubilee Medal for outstanding community service. Didi is married to Ignat Kaneff and lives in Mississauga, Ontario