The Great Comet: The Journey of a New Musical to Broadway (Hardcover) 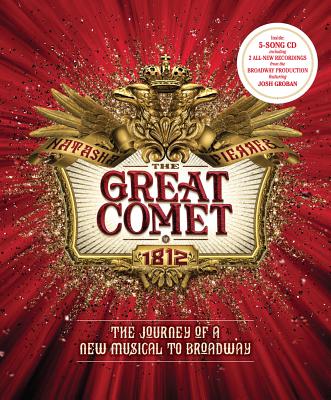 A behind-the-scenes look at the making of an award-winning musical
Here is the official, fascinating, behind-the scenes journey of the new musical Natasha, Pierre & The Great Comet of 1812, from its inception, to Off-Off Broadway, to Off-Broadway, to its premiere at the Imperial Theatre on Broadway. The musical is based on a dramatic 70-page slice of Leo Tolstoy's War and Peace. Profusely illustrated, the book also includes an annotated script and a special CD with three songs from the Off-Broadway production and two all-new recordings for the Broadway production featuring Josh Groban with a 25-piece orchestra.

STEVEN SUSKIN has written 15 books about theater and music, including Show Tunes (Oxford University Press), The Sound of Broadway Music (Oxford University Press), Opening Night on Broadway (Schirmer), and The Book of Mormon: The Testament of a Broadway Musical (HarperCollins). He has written hundreds of reviews, liner notes, and columns for such outlets as Playbill, Variety, and the Huffington Post. On the other side of the footlights, he has served as producer and/or manager of dozens of plays and musicals. He lives with his wife, Helen, and children Johanna and Charlie in Manhattan. DAVE MALLOY is a composer, writer, performer, sound designer, and orchestrator. He has written 11 musicals, including Natasha, Pierre & The Great Comet of 1812; other shows include Ghost Quartet, Preludes, Three Pianos, Black Wizard/Blue Wizard, Beowulf--A Thousand Years of Baggage, Beardo, Sandwich, Clown Bible, and (The 99-cent) Miss Saigon. He has won two Obie Awards, the Richard Rodgers Award, an ASCAP New Horizons Award, and a Jonathan Larson Grant, and has been a MacDowell fellow, composer-in-residence at Ars Nova, and guest professor in music theater at Princeton University and Vassar College. Future projects include adaptations of Moby-Dick and Shakespeare's Henriad. He lives in Brooklyn, NY.