The Truth About the Titanic: A Survivor's Story (Paperback) 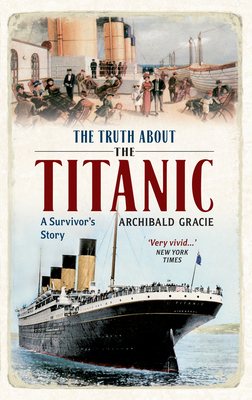 By Archibald Gracie, Campbell McCutcheon (Introduction by)
$19.95
Email or call for price

Awakened by the shuddering of a huge iceberg puncturing the side of the ship, Colonel Archibald Gracie was quickly dressed and on deck to see the aftermath of what was to become the most famous collision in history. He had gone to bed early on the night of 14 April 1912, expecting to be up with the larks, and enjoying a session in the gym and a game of squash before breakfast but by morning he was standing atop an overturned lifeboat awaiting rescue from the frozen North Atlantic. The night's exertions were to have a huge effect on Gracie. He began to write the story of the tragic events soon after he was back on dry land, completing most of the task by Autumn 1912. Telling the story of the last few hours of the sinking Titanic, and his miraculous escape as she plummeted 14,000 feet to the ocean floor, Gracie's book is recognised as simply the best account of the disaster. He died in December 1912, while proofing the manuscript, but the Truth about the Titanic remains today as the most accurate of the eyewitness accounts, recording Gracie's own story as well as that of each of the lifeboats as they left the doomed Titanic.

Archibald Gracie was an American writer and historian. He died in December 1912, as the proofs for his book about the Titanic were being worked on. He has provided us with the best first-hand account of the sinking.Campbell McCutcheon has had a life-long interest in the Olympic-class vessels and naval shipping. He has written extensively on the subject along with some Military History and Bradshaw’s Railway titles for Amberley. He lives in Gloucestershire, but he was born within sight and sound of the water and has been interested in ships from a young age.