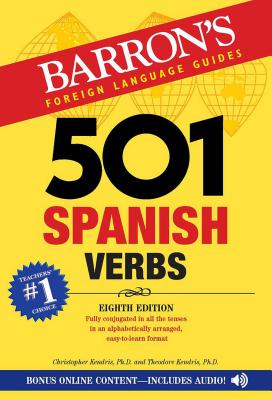 Publisher's Note: Products purchased from Third Party sellers are not guaranteed by the publisher for quality, authenticity, or access to any online entitlements included with the product.

The new eighth edition of Barron’s 501 Spanish Verbs shows students, travelers, and adult learners exactly how to use the 501 most common and useful Spanish verbs in all 15 tenses and moods. Fluency in Spanish starts with knowledge of verbs, and the authors provide clear, easy-to-use guidance. Each verb is listed alphabetically in easy-to-follow chart form—one verb per page with its English translation.

Dr. Christopher Kendris earned his B.S. and M.S. degrees at Columbia University in New York and his M.A. and Ph.D. degrees at Northwestern University in Evanston, Illinois. He worked as interpreter and translator of French for the U.S. State Department at the American Embassy in Paris. He taught French at the College of The University of Chicago, Colby College, Duke University, Rutgers—The State University of New Jersey, and the State University of New York at Albany. He was Chairman of the Department of Foreign Languages and Supervisor of 16 foreign language teachers on the secondary level at Farmingdale High School, Farmingdale, New York, where he was also a teacher of all levels of French and Spanish, and prepared students for the New York State French and Spanish Regents, SAT exams, and AP tests. Dr. Kendris was the author of 22 high school and college books, workbooks, and other language guides of French and Spanish.

Dr. Theodore Kendris earned his B.A. degree in Modern Languages at Union College, Schenectady, New York, where he received the Thomas J. Judson Memorial Book Prize for modern language study. He went on to earn his M.A. degree in French Language and Literature at Northwestern University, Evanston, Illinois, where he held a Teaching Assistantship. He earned his Ph.D. degree in French Literature at Université Laval in Quebec City, where he studied the Middle Ages and Renaissance. While at Université Laval, he taught French writing skills as a chargé de cours in the French as a Second Language program, and he was awarded a doctoral scholarship by the Fondation de l’Université Laval. Dr. Kendris has also taught in the Department of English and Foreign Languages at the University of St. Francis in Joliet, Illinois, as well as at the Hazleton Campus of Penn State University. He is currently an instructor in the Department of Languages and Cultures at Bloomsburg University, Bloomsburg, Pennsylvania.