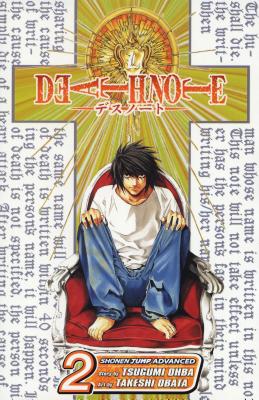 This is book number 2 in the Death Note series.

When Light Yagami finds a notebook giving him power over death, will he use it for good—or evil?

Light Yagami is an ace student with great prospects--and he's bored out of his mind. But all that changes when he finds the Death Note, a notebook dropped by a rogue Shinigami death god. Any human whose name is written in the notebook dies, and now Light has vowed to use the power of the Death Note to rid the world of evil. But when criminals begin dropping dead, the authorities send the legendary detective L to track down the killer. With L hot on his heels, will Light lose sight of his noble goal...or his life?

Light thinks he's put an end to his troubles with the FBI--by using the Death Note to kill off the FBI agents working the case in Japan! But one of the agents has a fiancée who used to work in the Bureau, and now she's uncovered information that could lead to Light's capture. To make matters worse, L has emerged from the shadows to work directly with the task force headed by Light's father. With people pursuing him from every direction, will Light get caught in the conflux?

Born in Tokyo, Tsugumi Ohba is the author of the hit series Death Note, Bakuman and Platinum End..

Takeshi Obata was born in 1969 in Niigata, Japan, and first achieved international recognition as the artist of the wildly popular Shonen Jump title Hikaru no Go, which won the 2003 Tezuka Osamu Cultural Prize: Shinsei “New Hope” Award and the 2000 Shogakukan Manga Award. He went on to illustrate the smash hit Death Note as well as the hugely successful manga Bakuman, All You Need Is Kill, and Platinum End.