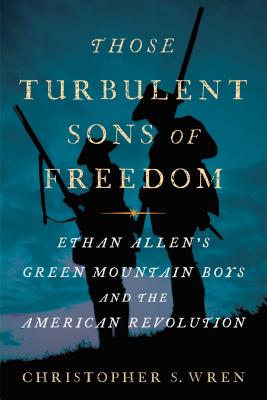 The story of Ethan Allen and the much-loved Green Mountain Boys of Vermont and their role in the American Revolution—the myth and the reality. A rare look at a corner of the Revolutionary War.

In Those Turbulent Sons of Freedom, Wren overturns the myth of Ethan Allen as a legendary hero of the American Revolution and a patriotic son of Vermont and offers a different portrait of Allen and his Green Mountain Boys. They were ruffians who joined the rush for cheap land on the northern frontier of the colonies in the years before the American Revolution. Allen did not serve in the Continental Army but he raced Benedict Arnold for the famous seizure of Britain’s Fort Ticonderoga. Allen and Arnold loathed each other. General George Washington, leery of Allen, refused to give him troops. In a botched attempt to capture Montreal against specific orders of the commanding American general, Allen was captured in 1775 and shipped to England to be hanged. Freed in 1778, he spent the rest of his time negotiating with the British but failing to bring Vermont back under British rule.

Based on original archival research, this is a groundbreaking account of an important and little-known front of the Revolutionary War, of George Washington (and his good sense), and of a major American myth. Those Turbulent Sons of Freedom is an important contribution to the history of the American Revolution.

Christopher S. Wren retired from The New York Times after nearly twenty-nine years as a reporter, foreign correspondent, and editor. He headed the Times’ news bureaus in Moscow, Cairo, Beijing, Ottawa, and Johannesburg; covered the United Nations; and reported from the former Soviet Union, Eastern Europe, the Balkans, the Middle East, China, Southeast Asia, Africa, South America, and Canada. He taught at Princeton University before coming to Dartmouth, where he is visiting professor in its Master of Arts in Liberal Studies program. He is the author of Those Turbulent Sons of Freedom.

“Ethan Allen's legend forever floats above the highest peak in the Green Mountains. But if you want to know the real man in all his human foibles and grandiosities, here is Chris Wren waiting at the base of the mountain with a story to tell you.”—Joseph J. Ellis, author of the forthcoming American Dialogue: The Founders and Us

“One British general called the Green Mountain Boys ‘the most active and most rebellious race of the continent.’ He knew, because they beat him in the field. Christopher Wren tells a lively, detailed story of revolution on America's northern frontier.”—Richard Brookhiser, author of John Marshall and Founders' Son

“In this compelling page-turner, Christopher Wren takes us behind the swashbuckling myth of Ethan Allen and the Green Mountain Boys to the gritty reality—the true military leader of Vermont’s legendary “Boys” was Seth Warner, who was destined to die a pauper, without honors from the emerging nation he served brilliantly.  Those Turbulent Sons of Freedom takes readers on a wild ride through the northern campaigns of the Revolution while providing essential corrections to history’s sometimes fickle verdicts.”—David O. Stewart, author of The Summer of 1787 and Madison’s Gift

“Wren fleshes out a lesser-known aspect of the Revolutionary War in this engrossing account of the Green Mountain Boys militia and its complicated role in the struggle for independence. . . . Wren vividly brings to life characters and events.”—Publishers Weekly

“A focused history of Ethan Allen and his men, who faced "some of the harshest combat in the American Revolution" and "made their own rules to create an independent republic, called Vermont." . . . fluid and well-researched.”—Kirkus Reviews

“There is no shortage of books about the America Revolution; to stand out, a work must reveal new insights effectively. Wren has just done that by superbly telling how the American Revolution played out within Vermont, both on the battlefield and on the home front. . . . Highly recommended for those seeking an excellent read about the nuances of the Revolution or Vermont's independent leanings.”—Library Journal

“In his surprising and interesting new account, Wren confirms that Allen and his “Boys” were indeed excellent fighters, but what exactly they were fighting for is another question. . . . Wren provides a useful, informative reexamination of an often-misunderstood aspect of the American Revolution.”—Booklist

Wren explores the myths as well as the realities faced by this particularly hardy band of soldiers and their crucial contribution to the Revolutionary War. A worthy addition to the canon of works written about this fractious period in this country’s history.
— Addison County Independent