The Geeks Shall Inherit the Earth: Popularity, Quirk Theory, and Why Outsiders Thrive After High School (Hardcover) 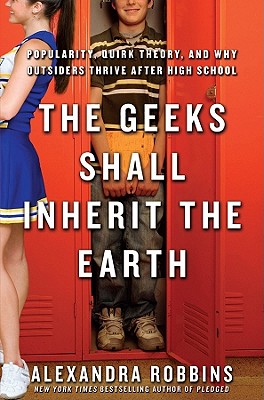 By Alexandra Robbins
$25.99
Email or call for price

These intertwining narratives "beautifully demonstrate . . . that the people who are excluded and bullied for their offbeat passions and refusal to conform are often the ones who are embraced and lauded for those very qualities in college and beyond" (The New York Times).

In a smart, entertaining, reassuring book that reads like fiction, Alexandra Robbins manages to cross Gossip Girl with Freaks and Geeks and explain the fascinating psychology and science behind popularity and outcasthood. She reveals that the things that set students apart in high school are the things that help them stand out later in life.

The Loner, who has withdrawn from classmates since they persuaded her to unwittingly join her own hate club

The Popular Bitch, a cheerleading captain both seduced by and trapped within her clique's perceived prestige

The Nerd, whose differences cause students to laugh at him and his mother to needle him for not being "normal"

The New Girl, determined to stay positive as classmates harass her for her mannerisms and target her because of her race

The Gamer, an underachiever in danger of not graduating, despite his intellect and his yearning to connect with other students

The Weird Girl, who battles discrimination and gossipy politics in school but leads a joyous life outside of it

The Band Geek, who is alternately branded too serious and too emo, yet annually runs for class president

In the middle of the year, Robbins surprises her subjects with a secret challenge -- experiments that force them to change how classmates see them.

Robbins intertwines these narratives -- often triumphant, occasionally heartbreaking, and always captivating -- with essays exploring subjects like the secrets of popularity, being excluded doesn't mean there's anything wrong with you, why outsiders succeed, how schools make the social scene worse -- and how to fix it.

The Geeks Shall Inherit the Earth is not just essential reading for students, teachers, parents, and anyone who deals with teenagers, but for all of us, because at some point in our lives we've all been on the outside looking in.

Alexandra Robbins, winner of the prestigious 2014 John Bartlow Martin Award for Public Interest Magazine Journalism, is the author of four New York Times bestsellers, including Pledged and The Geeks Shall Inherit the Earth. She has written for the New Yorker, Vanity Fair, New York Times, and other publications, and has appeared on numerous television shows from 60 Minutes to The Colbert Report.