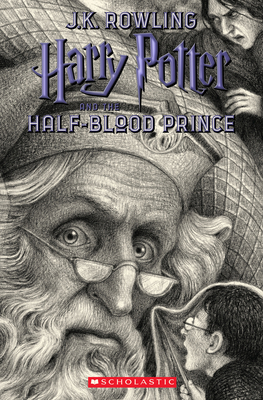 This is book number 6 in the Harry Potter series.

A special new edition in celebration of the 20th anniversary of the publication of Harry Potter and the Sorcerer's Stone, with a stunning new cover illustration by Caldecott Medalist Brian Selznick. The war against Voldemort is not going well; even Muggle governments are noticing. Ron scans the obituary pages of the Daily Prophet, looking for familiar names. Dumbledore is absent from Hogwarts for long stretches of time, and the Order of the Phoenix has already suffered losses. And yet...As in all wars, life goes on. Sixth-year students learn to Apparate - and lose a few eyebrows in the process. The Weasley twins expand their business. Teenagers flirt and fight and fall in love. Classes are never straightforward, though Harry receives some extraordinary help from the mysterious Half-Blood Prince.