Spy the Lie: Former CIA Officers Teach You How to Detect Deception (Paperback) 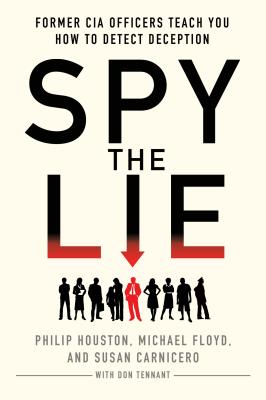 Imagine how different your life would be if you could tell whether someone was lying or telling you the truth. Be it hiring a new employee, investing in a financial interest, speaking with your child about drugs, confronting your significant other about suspected infidelity, or even dating someone new, having the ability to unmask a lie can have far-reaching and even life-altering consequences.

As former CIA officers, Philip Houston, Michael Floyd, and Susan Carnicero are among the world's best at recognizing deceptive behavior. Spy the Lie chronicles the captivating story of how they used a methodology Houston developed to detect deception in the counterterrorism and criminal investigation realms, and shows how these techniques can be applied in our daily lives.

Through fascinating anecdotes from their intelligence careers, the authors teach readers how to recognize deceptive behaviors, both verbal and nonverbal, that we all tend to display when we respond to questions untruthfully. For the first time, they share with the general public their methodology and their secrets to the art of asking questions that elicit the truth.

Spy the Lie is a game-changer. You may never read another book that has a more dramatic impact on your career, your relationships, or your future.

Philip Houston is a nationally recognized authority on deception detection, critical interviewing and elicitation. His 25-year career with the Central Intelligence Agency included thousands of interviews and interrogations for the CIA and other federal agencies, both as an investigator and as a polygraph examiner. He is credited with developing a detection of deception methodology currently employed throughout the U.S. intelligence and federal law enforcement communities. Phil introduced the detection of deception methodology to the corporate world with the co-founding of Business Intelligence Advisors, where he works with the company's largest clients in the U.S. and abroad. Houston is also the author of Spy the Lie.

Michael Floyd began his career as a commissioned officer in the U.S. Army Military Police, then served as a Special Agent with the Central Intelligence Agency and the National Security Agency. He now provides training and consulting services for Forbes Top 10 families and large corporations throughout North America, Europe and Asia. He is widely recognized as a leading authority on interviewing, detection of deception and elicitation in cases involving criminal activity, personnel screening and national security issues.

A former security specialist with the Central Intelligence Agency, Susan Carnicero has 20 years of experience in interviewing, interrogation and polygraph examination, focused primarily on national security, employment and criminal issues. Susan is the developer of a behavioral screening program currently used within the federal government and in a variety of private industries. She is widely considered a leading authority on interviewing, detection of deception, and elicitation.

Don Tennant is a former National Security Agency analyst and business/technology journalist. As editor in chief of Computerworld, he won a variety of national journalism awards, including the Timothy White Award for Editorial Integrity and the Jesse H. Neal National Business Journalism Award from American Business Media.

“Wouldn't it be great if we could bottle the collective wisdom of CIA officers who have interrogated hundreds of people, and apply all that experience to situations where we need to know if someone is telling the truth? In Spy the Lie, three CIA veterans have done just that. If you read this book, which is packed with great anecdotes, you will feel closer to being able to flesh out a lie.” —Forbes

“Lie detection isn't ingrained; it's learned… By following their advice, which is based off years of interrogating terrorists and double agents, anyone can improve their odds at getting to the truth.” —New York Post

“Michael Floyd and two fellow former ex-agents, with more than 75 years of interrogation experience between them, honed their methods on terrorist and criminals. But their advice work equally well on cheating spouses, lollygagging employees, or schoolkids feigning illness.” —StarTribune

“This book is both entertaining and highly informative—and it’s the real deal. It gives readers genuine practical tools and tactics to use in all walks of life. I highly recommend it.” —David J. Lieberman, Ph.D., New York Times bestselling author of Never Be Lied to Again

“For many years, Phil and his team have employed their skills to vet terrorist sources, catch spies, and protect the nation's secrets. With this book, they have done something perhaps even more remarkable: Equip anyone to reliably detect deception. Consciously or not, we all judge others' sincerity and truthfulness to protect ourselves. Most of us do it badly. This book will teach you to do it well.” —Robert Grenier, chairman of ERG Partners, former director of the CIA Counter-Terrorism Center

“In this entertaining, instructive, and fascinating book, Phil, Michael, and Susan lay out an easy-to-follow process for detecting deception, with real-life stories that are the stuff of spy novels. I have used their model for years with phenomenal results.” —Marisa R. Randazzo, Ph.D., managing partner at SIGMA Threat Management Associates, former chief research psychologist, U.S. Secret Service

“A terrific resource for anyone who would love to be able to tell when someone is lying. Having undergone their training, I've applied their methodology in some critical situations, and I've been blown away by its effectiveness. Spy the Lie is a captivating read with practical takeaway you'll use every day.” —John Miller, senior correspondent at CBS News, former associate deputy director of National Intelligence, and former assistant director for public affairs at the FBI


“When my detectives on the LAPD's Counterterrorism Bureau and Robbery-Homicide Division took the course, we had veteran investigators tell us, ‘No one should ever be promoted to the rank of detective without taking this course,' and ‘I now want to go back and re-interview every suspect I ever questioned.' What this team has developed is truly unique, and anyone can learn to use it.” —Bill Bratton, chairman of Kroll Associates, former LAPD chief, former NYPD and Boston Police Department police commissioner