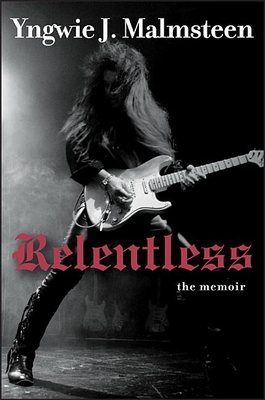 How does a kid from Sweden make his way to America at the tender age of eighteen and, within a month, have people lining up to hear him play guitar? Where did he get those chops? How did he develop his singular style of playing? And what happened next?

In Relentless, world-renowned guitarist Yngwie Malmsteen relives the greatest and worst moments of his storied career as one of the most admired, talked about, and emulated guitarists in the world-from how he managed to buy his first Strat and assemble his first wall of Marshall amps to the truth behind the title of his 2005 Unleash the Fury album and beyond.

At the center of Yngwie's story is his lifelong rebellion against the conventions and restrictions of the Sweden in which he was raised. "Don't stand out," he was told when he dreamed of being a professional musician. "That won't work," he was warned when he wanted to play loud or little-known songs. His entire musical career has been a proclamation that he will stand out, and it will work.

That determination drove the fourteen-year-old Yngwie to make his now legendary Demo Powerhouse tape, the recording that later caught the ear of Shrapnel Records' Mike Varney, who brought Yngwie to America in 1982. It drove Yngwie to become the de facto leader of two already existing bands before launching a solo career just eighteen months later. It also drove him to act out in sometimes bizarre ways and develop a reputation as a mercurial, perhaps unstable, personality.

Yngwie recounts these incidents with neither pride nor apology, but with a great deal of color. And he gets into the seedy and unscrupulous side of rock and roll, revealing how managers, record companies, and others ripped him off, before his wife, April, rescued both him and his business.

Musicians will be drawn to Yngwie's descriptions of how he composed his greatest songs and his overall approach to composition and to band dynamics. He writes with admiration about musicians, from Deep Purple's Ritchie Blackmore to nineteenth-century violinist and composer Niccol Paganini, who influenced his playing and the development of his unique neoclassical-metal style.

Whether you're a total metal freak, an aspiring musician, or someone who just loves a pull-out-all-the-stops rock-and-roll biography, you will read Relentless relentlessly from first page to last.

YNGWIE MALMSTEEN is one of rock's virtuoso guitarists. "Yngwie J. Malmsteen's Rising Force," his 1984 Grammy-nominated album, established the style now referred to as neoclassical melodic rock. He has recorded more than two dozen solo albums and a dozen more with other bands, as well as fifteen live performance DVDs. In 2013, Yngwie created the online website RelentlessShred.com, which is considered the most authoritative source for how to play his challenging neoclassical style, covering everything from harmonic minor scales and diminished chords to advanced arpeggios. With an international fan base, Yngwie continues to record and tour around the world.