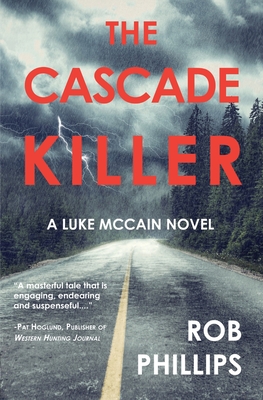 As a Fish and Wildlife police officer, Luke McCain and his partner -- a yellow Lab named Jack -- spend their days patrolling the rivers, lakes and forests of the wild and scenic Cascade Mountains in Eastern Washington. After hunters discover human remains inside a bear's stomach, McCain is thrust into the investigation. As more dead women are found in McCain's region, authorities suspect a serial killer is prowling the mountains he knows best. McCain will need his knowledge as an outdoorsman, and his instincts as an investigator, to track the psychopathic predator before he kills again.

Praise for THE CASCADE KILLER

"Phillips tells a masterful tale that is engaging, endearing and suspenseful. It is rich with local knowledge of central Washington and the Cascade Mountains, two places the author is intimately familiar with. Once I started, it was hard to put the book down. A page-turner for sure."

"Real Captivating Once you start, you can't put it down The Cascade Killer is VERY well done "

--Scott Haugen, host and producer of The Hunt and author of numerous outdoor books

"Yakima outdoor writer Rob Phillips knows his woods, waters and wardens, and it shows as he weaves them into this fast-paced, gripping murder mystery. You can practically smell the ponderosas and pack horses among pages that seem to leap straight out of the gazetteer. Mixing good old fashioned game wardening with current events, Phillips highlights the complex, often lonely and very vital work Washington fish and wildlife police perform, and a modern nationaltravesty, the high number of missing or murdered native women."

"Rob Phillips' intimate knowledge of Washington State's outdoors scene and recent newsworthy events is on full display in this fast-paced novel. Featuring a smart, hard-working fish and wildlife officer, a demented serial killer, an attractive FBI agent and a scene-stealing Labrador retriever, this is a great read and if you are like me you'll have a hard time putting this book down "

"The author's knowledge and love of the outdoors and the bounty it provides shines through in this fast-paced, fun and thrilling story. The Cascade Killer captures many of the attributes important to those within the rural, outdoor community."

"The Cascade Killer is a fun, adventurous, entertaining story. I thoroughly enjoyed accompanying Wildlife Officer Luke McCain, his yellow Lab, Jack, and FBI Agent Sara Sinclair as they pursued a serial killer in the Cascade Mountains of Washington. A great story "

--Steve Raabe, author of Patrolling the Heart of the West, True Tales of a Nevada State Trooper

"The Cascade Killer checks all the boxes of a good book. It is entertaining and fast-paced. It also provides a glimpse into the world of today's game warden, from the routine to the spine tingling. This book has it all "

"Luke McCain and his lovable sidekick, Jack the yellow Lab, are hard not to love in this fast-paced mystery that you may not be able to put down. I cannot wait for more "

--Vikki J. Carter, host and producer of Authors of the Pacific Northwest Podcast