The Scent of Scandal: Greed, Betrayal, and the World's Most Beautiful Orchid (Florida History and Culture) (Paperback) 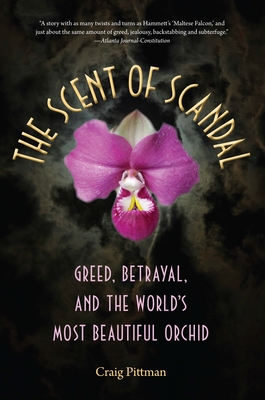 "FANTASTIC. If I did not know most of the main players I would have thought the author had a vivid and twisted imagination."--Paul Martin Brown, author of Wild Orchids of Florida

"A fascinating true story of obsession, greed, and lust for the unobtainable. Reminds me a great deal of The Maltese Falcon. This rare flower is definitely the stuff that dreams are made of."--Ace Atkins, author of Devil's Garden and Infamous

After its Peruvian discovery in 2002, Phragmipedium kovachii became the rarest and most sought-after orchid in the world. Prices soared to $10,000 on the black market. Then one showed up at Marie Selby Botanical Gardens, where every year more than 100,000 people visit. They come for the lush landscape on Sarasota Bay and for Selby's vast orchid collection, one of the most magnificent in the world.

The collision between Selby's scientists and the smugglers of Phrag. Kovachii, a rare ladyslipper orchid hailed as the most significant and beautiful new species discovered in a century, led to search warrants, a grand jury investigation, and criminal charges. It made headlines around the country, cost the gardens hundreds of thousands of dollars in donations, and led to tremendous internal turmoil. Investigative journalist Craig Pittman unravels this tangled web to shine a spotlight on flaws in the international treaties governing trade in endangered wildlife--which may protect individual plants and animals in shipping but do little to halt the destruction of whole colonies in the wild. The Scent of Scandal unspools like a riveting mystery novel, stranger than anything in Susan Orlean's The Orchid Thief or the film Adaptation. Pittman shows how some people can become so obsessed--with beauty, with profit, with fame--that they will ignore everything, even the law.

Craig Pittman is an award-winning journalist who writes about environmental issues for Florida's largest newspaper, the Tampa Bay Times. He is the coauthor of Paving Paradise and author of Manatee Insanity.