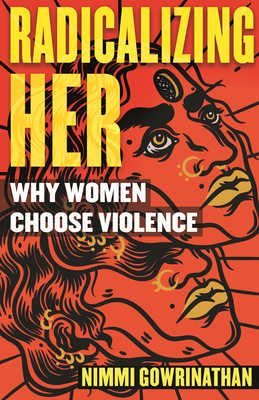 An urgent corrective to the erasure of the female fighter from narratives on gender and power, demanding that we see all women as political actors.

“Violence, for me, and for the women I chronicle in this book, is simply a political reality.”

Though the female fighter is often seen as an anomaly, women make up nearly 30% of militant movements worldwide. Historically, these women—viewed as victims, weak-willed wives, and prey to Stockholm Syndrome—have been deeply misunderstood. Radicalizing Her holds the female fighter up in all her complexity as a kind of mirror to contemporary conversations on gender, violence, and power. The narratives at the heart of the book are centered in the Global South, and extend to a criticism of the West’s response to the female fighter, revealing the arrayed forces that have driven women into battle and the personal and political elements of these decisions.

Gowrinathan, whose own family history is intertwined with resistance, spent nearly twenty years in conversation with female fighters in Sri Lanka, Eritrea, Pakistan, and Colombia. The intensity of these interactions consistently unsettled her assumptions about violence, re-positioning how these women were positioned in relation to power. Gowrinathan posits that the erasure of the female fighter from narratives on gender and power is not only dangerous but also, anti-feminist.

She argues for a deeper, more nuanced understanding of women who choose violence noting in particular the tendency of contemporary political discourse to parse the world into for—and against—camps: an understanding of motivations to fight is read as condoning violence, and oppressive agendas are given the upper hand by the moral imperative to condemn it.

Coming at a political moment that demands an urgent re-imagining of the possibilities for women to resist, Radicalizing Her reclaims women’s roles in political struggles on the battlefield and in the streets.

Nimmi Gowrinathan’s writing on the female fighter has been featured in publications as varied as Vice, Harper’s Magazine, Foreign Policy, Freeman’s Journal, Guernica Magazine, and The New York Times, among others. She is the Publisher of Adi Magazine, a literary magazine aiming to rehumanize policy, and creator of the Female Fighters Series at Guernica Magazine. She is Professor and the Director of the Politics of Sexual Violence Initiative at the City College of New York. Follow her work at deviarchy.com and on Twitter (nimmideviarchy).

“A seminal and original work of simply outstanding scholarship that will be met with substantial appreciation by both academia and the non-specialist general reader.”
—Midwest Book Review

"In her incisive new book Radicalizing Her: Why Women Choose Violence, Dr. Nimmi Gowrinathan presents a pressing analysis that reveals just how little the struggles or achievements of female fighters in other countries are valued by mainstream white feminists."
—The Baffler

“Nimmi Gowrinathan has a political imagination like no other. It is playful, yet profound; it is compelling, yet unimposing; it is unafraid of complexity, yet always pushing us toward clarity. With its agile prose and completely innovative form, this book gripped me from beginning to end, forever changing the way I understand how women emerge from layers of oppression and systematic state violence—and teach themselves how to fight back.”
—Valeria Luiselli, author of Tell Me How It Ends: An Essay in 40 Questions

“Radicalizing Her stands out for its clear-eyed exploration of a little-understood human terrain. Talking with former female fighters, and writing in an intimate, often poetic style, Gowrinathan examines the relationship between women, power, and violence in a bracing, sometimes wrenching narrative. This is a book born out of a great degree of personal commitment, and the author deserves high praise for her persistence.”
—Jon Lee Anderson, author of Che Guevara

“Dr. Gowrinathan has spent two decades with women militants—and this brilliant, lyrical book is both a meditative engagement with the aftershocks of state violence and an explosive exercise in telling deeply uncomfortable truths about the gendered lens of our social outlook. This is the kind of book that will unravel your understanding of the world. Reading Gowrinathan is a rare treat: when she narrates a story, she is as gripping and lyrical as Arundhati Roy—when she presents her philosophical takeaways on violence, she is precise and incisive, the Hannah Arendt of our times.”
—Meena Kandasamy, author of When I Hit You