Yin Yu Tang: The Architecture and Daily Life of a Chinese House (Paperback) 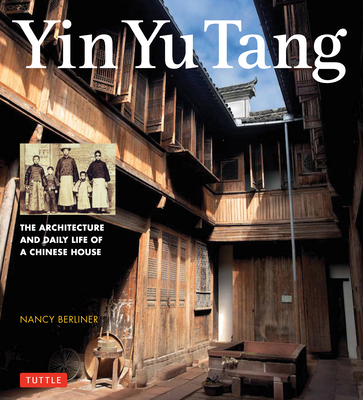 With hundreds of photographs and a wealth of information, Yin Yu Tang tells the history of a traditional Chinese house and the fascinating stories of its occupants.

In the late Qing dynasty, around the year 1800, a prosperous Chinese merchant named Huang built a house for his family in a remote village southwest of Shanghai. He called the home Yin Yu Tang which means Hall of Abundant Shelter—implying his desire for the building to shelter many of his descendants. For seven generations, members of the Huang family ate, slept, laughed, cried, married and gave birth in the house.

By the mid-1990s, the surviving members of the Huang family had moved away from Yin Yu Tang to take jobs in the cities. In 2003 the house found a new home as a permanent exhibit at the Peabody Essex Museum in Salem, Massachusetts. This book, with its room-by-room, generation-by-generation documentation of life in the house, serves as a unique and invaluable introduction to traditional Chinese family and village life.

Nancy Berliner, one of the country's foremost experts on Chinese furniture and arts, takes the reader on a tour of this unique homestead providing detail on Chinese architecture, construction methods, decoration, furniture and family heirlooms. She weaves a story of domestic life in Chinese culture by explaining the traditions of the family who lived here—especially their love and respect for family and ancestors. She also documents the remarkable restoration and reconstruction of Yin Yu Tang, truly a treasure trove of Chinese history.

With hundreds of photographs, scores of primary documents, and thousands of fascinating details, Yin Yu Tang: The Architecture and Daily Life of a Chinese House offers a vivid portrait of everyday life in traditional China.

Nancy Berliner is currently the Wu Tung Curator of Chinese Art at the Museum of Fine Arts, Boston. She previously held the position of curator of Chinese art at the Peabody Essex Museum in Salem, Massachusetts, where she spearheaded and curated the Yin Yu Tang house project. She also serves as a consultant to the World Monuments Fund on the Forbidden City's Qianlong Garden conservation project. She has lectured throughout the world including at Harvard University, Dartmouth College, University of California at Berkeley, Asia Society, La Sorbonne in Paris, Tel Aviv University, Palace Museum and World Art Museum in Beijing. She has written for the New York Times, Asian Wall Street Journal, Boston Globe, Asian Art, and Orientations magazines.

"The complex tale of Yin Yu Tang's salvation, careful dismantling, painstaking reconstruction and authentic refurnishing at the New England institution is alluded to in a brief epilogue. But it is the profoundly moving saga of the Huang family, generations of whom lived and died in Yin Yu Tang, that raises this above a routine preservation success story. Their touching and uplifting stories, told in the first person through letters, diaries and interviews, confirm how the psychic relationship between house and home is by far the most elemental function of architecture." —The New York Times

"If only walls could talk? Well, Yin Yu Tang's did, and what a story they have to tell." —Asian Review of Books

"This book is recommended…for the Chinese history and culture sections of both public and academic libraries." —Library Journal

"When architecture is viewed as an art, it marks the beginning of civilization Echoed with traditional music, it is a history book written in wood and stone." —Luo Zhewen, architectural historian and author of Ancient Pagodas in China and China's Imperial Tombs and Mausoleums

"Oh, if a house could talk…" Thanks to the Peabody Essex Museum and this book, Yin Yu Tang is speaking volumes about its fascinating two-hundred-year history. As a correspondent for CBS News Sunday Morning, I've gotten to do some amazing stories, but it isn't often one completely captivates me the way this one did. The story of Yin Yu Tang, the house that left home, is magical." —Martha Teichner, CBS News