No Woman No Cry: My Life with Bob Marley (Paperback) 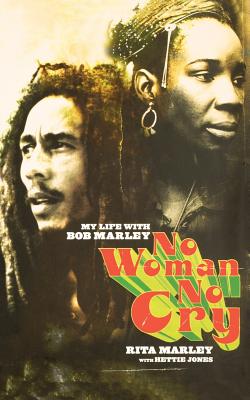 A memoir by the woman who knew Bob Marley best--his wife, Rita.

Rita Marley grew up in the slums of Trench Town, Jamaica. Abandoned by her mother at a very young age, she was raised by her aunt. Music ran in Rita's family, and even as a child her talent for singing was pronounced. By the age of 18, Rita was an unwed mother, and it was then that she met Bob Marley at a recording studio in Trench Town. Bob and Rita became close friends, fell in love, and soon, she and her girlfriends were singing backup for the Wailers. At the ages of 21 and 19, Bob and Rita were married.

The rest is history: Bob Marley and the Wailers set Jamaica and the world on fire. But while Rita displayed blazing courage, joy, and an indisputable devotion to her husband, life with Bob was not easy. There were his liaisons with other women--some of which produced children and were conducted under Rita's roof. The press repeatedly reported that Bob was unmarried to preserve his "image." But Rita kept her self-respect, and when Bob succumbed to cancer in 1981, she was at his side. In the years that followed, she became a force in her own right -- as the Bob Marley Foundation's spokesperson and a performer in her reggae group, the I-Three.

Written with author Hettie Jones, No Woman No Cry is a no-holds-barred account of life with one of the most famous musicians of all time. In No Woman No Cry, readers will learn about the never-before-told details of Bob Marley's life, including:

Rita Marley performs with the reggae group I-Three and helps run the Bob Marley Foundation. Rita was married to Bob Marley in 1966, when she was nineteen and he was twenty-one, and she remained his wife until his death in 1981. The mother of Bob's children, she performs worldwide. She makes her home in Ghana, West Africa. Hettie Jones is a poet and prose writer, author of numerous books, including How I Became Hettie Jones, a memoir of the Beats and of her former marriage to LeRoi Jones (now Amiri Baraka). She lives in New York City, where she teaches writing at New School University and the 92nd Street Y Poetry Center.

"Rita does his legacy a great favor by humanizing him and his astounding musical gifts."
—Rolling Stone

"Her writing carries a distinct patois and a directness that makes the book a breezy kind of read."
—The Hamilton Spectator