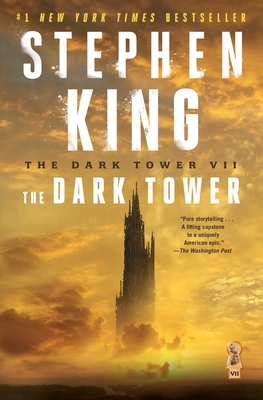 This is book number 7 in the The Dark Tower series.

Creating "true narrative magic" (The Washington Post) at every revelatory turn, Stephen King surpasses all expectation in the stunning final volume of his seven-part epic masterwork. Entwining stories and worlds from a vast and complex canvas, here is the conclusion readers have long awaited—breathtakingly imaginative, boldly visionary, and wholly entertaining.

Roland Deschain and his ka-tet have journeyed together and apart, scattered far and wide across multilayered worlds of wheres and whens. The destinies of Roland, Susannah, Jake, Father Callahan, Oy, and Eddie are bound in the Dark Tower itself, which now pulls them ever closer to their own endings and beginnings...and into a maelstrom of emotion, violence, and discovery.

Stephen King is the author of more than sixty books, all of them worldwide bestsellers. His recent work includes Fairy Tale, Billy Summers, If It Bleeds, The Institute, Elevation, The Outsider, Sleeping Beauties (cowritten with his son Owen King), and the Bill Hodges trilogy: End of Watch, Finders Keepers, and Mr. Mercedes (an Edgar Award winner for Best Novel and a television series streaming on Peacock). His novel 11/22/63 was named a top ten book of 2011 by The New York Times Book Review and won the Los Angeles Times Book Prize for Mystery/Thriller. His epic works The Dark Tower, It, Pet Sematary, Doctor Sleep, and Firestarter are the basis for major motion pictures, with It now the highest-grossing horror film of all time. He is the recipient of the 2020 Audio Publishers Association Lifetime Achievement Award, the 2018 PEN America Literary Service Award, the 2014 National Medal of Arts, and the 2003 National Book Foundation Medal for Distinguished Contribution to American Letters. He lives in Bangor, Maine, with his wife, novelist Tabitha King.

"One gets the feeling that this colossal story means a lot to King, that he's telling it because he has to....He's giving The Dark Tower everything he's got."

"With the conclusion of this tale...King has certainly reached the top of his game."
— Publishers Weekly (starred review)