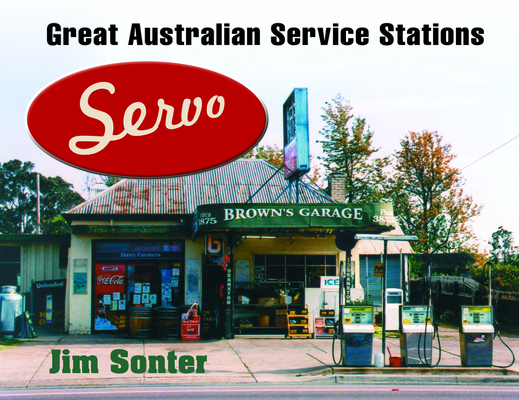 A nostalgic look back at a time when the iconic Aussie service station wasn't exactly the same as the one down the road. From Toodyay in the west to Sydney's suburban Balmain, Jim Sonter's been there, visited the servo, and taken the picture.

the first service stations appeared in Australia in the 1910s and increased dramatically in number over the country post World War II when motor vehicle production boomed. they popped up in little country towns to enable the motorist to travel further abroad. Back then they were not branded as they are now, each had its own style, its own flair and stocked more than one brand of fuel. this collection of photographs started on a holiday in 1982 when Jim Sonter saw the 1930s art deco servo, Bingara Motors, in NSW and snapped off a shot on his camera. What started as a one-off soon became an obsession and Jim now has over 1000 photos of service stations spanning six decades of Australian history. SERVO contains over 150 photos of servos ranging as far back as the 1910s and Australia's first. What you will notice is that no two servos are alike.