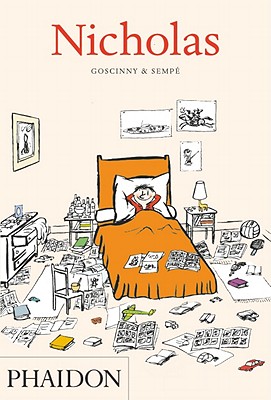 Nicholas is the first in a series of five books, that bring to life the day-to-day adventures of a young school boy - amusing, endearing and always in trouble. An only child, Nicholas appears older at school than he does at home; his touchingly naive reactions to different situations cut through the preconceptions of adults to result in a formidable sequence of escapades.

René Goscinny (1926–77), born in Paris, lived most of his early years in Buenos Aires and New York. He returned to France in the 1950s where he met Jean-Jacques Sempé and together they created the character of Nicholas, the famous schoolboy. He later worked with Albert Uderzo on making the adventures of Asterix the Gaul. A prolific and internationally successful children's author, he is also the creator of Lucky Luke and Dingodossiers, among others. He received Césars repeatedly for his numerous animated cartoons.

Jean-Jacques Sempé (b.1932), expelled from school for bad behaviour, enjoyed a vast range of jobs including winebroker and supervisor at children's holiday camps. His world-renowned illustrations and cartoons are featured on the covers of the New Yorker magazine and amuse the readers of Paris Match and the Figaro Littéraire on a weekly basis.

Anthea Bellwas awarded the Independent Foreign Fiction Prize and the Helen and Kurt Wolff Prize (USA) in 2002 for her translation of W.G. Sebald's Austerlitz. Her many works of translation from French and German (for which she has received several other awards) include the Nicholas books and, with Derek Hockridge, the entire Asterix the Gaul saga by René Goscinny and Albert Uderzo.

'Nicholas has an engagingly positive outlook on life, loves school despite his academic failings, and has refined the art of driving his parents up the wall, while remaining blissfully unaware of how infuriating they find him.' (Guardian)