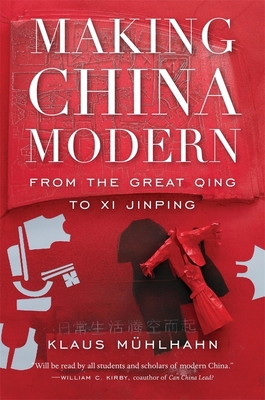 "Thoughtful, probing...a worthy successor to the famous histories of Fairbank and Spence that] will be read by all students and scholars of modern China."
--William C. Kirby, coauthor of Can China Lead?

It is tempting to attribute the rise of China to Deng Xiaoping and to recent changes in economic policy. But China has a long history of creative adaptation. In the eighteenth century, the Qing Empire dominated a third of the world's population. Then, as the Opium Wars and the Taiping Rebellion ripped the country apart, China found itself verging on free fall. More recently, after Mao, China managed a surprising recovery, rapidly undergoing profound economic and social change. A dynamic story of crisis and recovery, failure and triumph, Making China Modern explores the versatility and resourcefulness that guaranteed China's survival, powered its rise, and will determine its future. "Chronicles reforms, revolutions, and wars through the lens of institutions, often rebutting Western impressions."
--New Yorker "A remarkable accomplishment. Unlike an earlier generation of scholarship, Making China Modern does not treat China's contemporary transformation as a postscript. It accepts China as a major and active player in the world, places China at the center of an interconnected and global network of engagement, links domestic politics to international dynamics, and seeks to approach China on its own terms."
--Wen-hsin Yeh, author of Shanghai Splendor