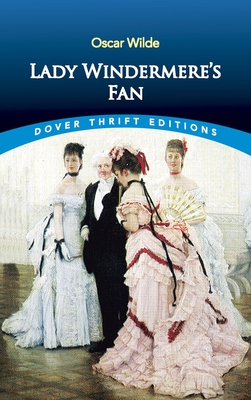 Clever dialogue, fast-paced repartee, and pithy epigrams abound in this sparkling Victorian comedy of manners. The first of Oscar Wilde's dramas, the 1892 play attests to the author's legendary reputation as a wit and keen observer of ironic situations. In Lady Windermere's Fan, Wilde offers a splendidly satirical view of society's obsessive regard for appearances rather than reality.
A paragon of morality, Lady Windermere firmly rejects the company of anyone exhibiting even the slightest deviation from the social code. Suspecting her husband of a dalliance with Mrs. Erlynne, a woman of dubious reputation, Lady Windermere rashly decides to abandon her secure position for the seductive charms of Lord Darlington. The voice of caution arises from an unexpected source when the mysterious Mrs. Erlynne reveals the calamitous effects of her own disregard for duty and virtue, and she augments her advice with an act of self-sacrifice. By laying claim to Lady Windermere's telltale fan, the woman from outside society shows the model of social propriety the difference between true morality and its semblance.
More than a century after the play's debut, the luster of its humorous quips, merry bon mots, and thought-provoking paradoxes remains undimmed. This modestly priced edition of Wilde's scintillating comic masterpiece will delight lovers of drama and literature.

Poet and playwright Oscar Wilde (1854-1900) remains best known for his comedies of the 1890s, including The Importance of Being Earnest, and for his tragic imprisonment and untimely death.