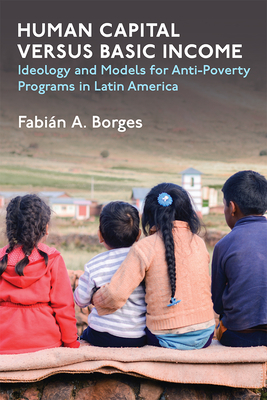 Latin America underwent two major transformations during the 2000s: the widespread election of left-leaning presidents (the so-called left turn) and the diffusion of conditional cash transfer programs (CCTs)—innovative social programs that award regular stipends to poor families on the condition that their children attend school. Combining cross-national quantitative research covering the entire region and in-depth case studies based on field research, Human Capital versus Basic Income: Ideology and Models for Anti-Poverty Programs in Latin America challenges the conventional wisdom that these two transformations were unrelated. In this book, author Fabián A. Borges demonstrates that this ideology greatly influenced both the adoption and design of CCTs.

There were two distinct models of CCTs: a “human capital” model based on means-tested targeting and strict enforcement of program conditions, exemplified by the program launched by Mexico’s right, and a more universalistic “basic income” model with more permissive enforcement of conditionality, exemplified by Brazil’s program under Lula. These two models then spread across the region. Whereas right and center governments, with assistance from international financial institutions, enacted CCTs based on the human capital model, the left, with assistance from Brazil, enacted CCTs based on the basic income model.

The existence of two distinct types of CCTs and their relation to ideology is supported by quantitative analyses covering the entire region and in-depth case studies based on field research in three countries. Left-wing governments operate CCTs that cover more people and spend more on those programs than their center or right-wing counterparts. Beyond coverage, a subsequent analysis of the 10 national programs adopted after Lula’s embrace of CCTs confirms that program design—evaluated in terms of scope of the target population, strictness of conditionality enforcement, and stipend structure—is shaped by government ideology. This finding is then fleshed out through case studies of the political processes that culminated in the adoption of basic income CCTs by left-wing governments in Argentina and Bolivia and a human capital CCT by a centrist president in Costa Rica.

“This is a masterful and monumental work, and I am confident that it will make a significant impact in the areas/literatures on Latin American politics and on public policy. This extremely well researched and well written book puts forth many thoughtful insights that have remained somewhat latent in the literature on CCTs to date; synthesizes a vast amount of information in an interesting way; and brings to bear important new empirical findings.” —Wendy Hunter, University of Texas at Austin