Social Order and the General Theory of Strategy (Paperback) 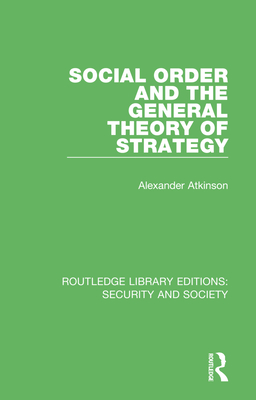 Is there a place left in international politics for the real use of violence as an instrument of policy in the nuclear age? Originally published in 1981, Dr Atkinson attempts to answer this question with new considerations in the presentation of a general theory of strategy. He argues that the classical theory of strategy, so influential for the 19th century and for the better half of the 20th century, was built on a mainly hidden structure of reasoning that still infests theory today. The larger and socially-rooted lessons that insurgent warfare can inform, as best exemplified in the primary sources of the Chinese Civil War period, reveal in a new light this hidden structure of which Clausewitz is the earliest and most eloquent example. By this analysis of the insurgent and classical paradigm opposites the author intends to strip away the blinds of convention still circulating in theory today so that observers and students of international politics may see where new forms of politically motivated violence in the nuclear age seem more than ever to be headed.

Here we have perfect paradigm opposites. In the conventional world battle-field action and ideally 'decisive battle' is the center of all other issues in which such conventional logic in the end sweeps up everything else and runs it back through the logic into success or failure of armed power on the battle-field. Everything hangs on this. In the 'revisionist' insurgent world where social order is weaponized as an object and source of military power through its inherent and valuable (armed) power structures social order replaces narrow battle-field action (ideally focused on 'decisive battle') and alternatively redirects the entire logic and all other considerations, including previously heroic conventional military assets, are remodeled to act against (armed) enemy power structures inherent (as always) in social order for the ultimate object of military victory. Again, everything is on this alone. Which paradigm - one the opposite mirror image of the other - will prevail will depend on the stability and power of the nation state and its institutions, the continued and unhappy collapse on which I base the General Theory.