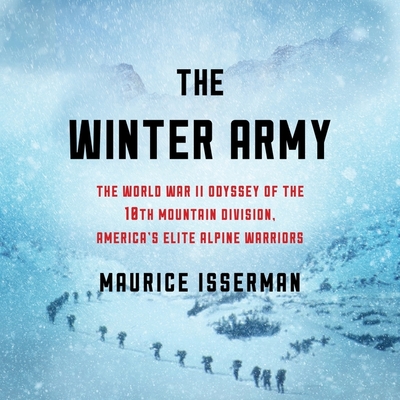 “Compelling and readable . . . I had serious trouble putting this book down.”—John C. McManus, author of Fire and Fortitude and The Dead and Those About to Die

The epic story of the U.S. Army’s 10th Mountain Division, whose elite soldiers broke the last line of German defenses in Italy’s mountains in 1945, spearheading the Allied advance to the Alps and final victory.

At the start of World War II, the US Army had two cavalry divisions—and no mountain troops. The German Wehrmacht, in contrast, had many well-trained and battle-hardened mountain divisions, some of whom by 1943 blocked the Allied advance in the Italian campaign. Starting from scratch, the US Army developed a unique military fighting force, the 10th Mountain Division, drawn from the ranks of civilian skiers, mountaineers, and others with outdoor experience. The resulting mix of Ivy League students, park rangers, Olympic skiers, and European refugees formed the first specialized alpine fighting force in US history. By the time it deployed to Italy at the beginning of 1945, this ragtag group had coalesced into a tight-knit unit. In the months that followed, at a terrible cost, they spearheaded the Allied drive in Italy to final victory.

Ranging from the ski slopes of Colorado to the towering cliffs of the Italian Alps, The Winter Army is a saga of an unlikely band of soldiers forged in the heat of combat into a brotherhood whose legacy lives on in US mountain fighters to this day.

MAURICE ISSERMAN, PhD, is the Publius Virgilius Rogers Professor of American History at Hamilton College, where he teaches US history, including the history of mountaineering. A former Fulbright grant winner, his prize-winning books include Fallen Giants (co-authored with Stewart Weaver), which was nominated for the Pulitzer Prize and the winner of the Banff Mountain Book Festival prize for best mountaineering history, the National Outdoor Book Award for best history, and the Andrew Eiseman Writers Award; The Other America, recipient of a Choice magazine Outstanding Academic Book Award; and Cronkite’s War (co-authored with Walter Cronkite IV). He has written for the New York Times, the Chicago Tribune, the Washington Post, the Boston Globe, the Los Angeles Times, the Christian Science Monitor,Newsday, the Philadelphia Inquirer, and the American Historical Review,as well as for numerous academic journals and contributed volumes. He lives in Clinton, New York.

“From the frozen spine of the Colorado Rockies to the icy steeps of Riva Ridge in Italy, Maurice Isserman skillfully tracks the birth of the 10th Mountain Division and its harrowing World War II battles. The Winter Army is a fitting tribute to the high-altitude soldiers who fought with more courage than oxygen.”
—Mark Obmascik, author of The Storm on Our Shores

“Compelling and readable, this is how a unit history should be written. Isserman has shed long overdue light on the remarkable 10th Mountain Division, an elite unit full of fascinating personalities, many of whom almost seem like characters from a fast-paced adventure novel. I had serious trouble putting this book down.”
—John C. McManus, author of Fire and Fortitude and The Dead and Those About to Die

“You won’t find any U.S. Army division history better than this one. Maurice Isserman’s superbly crafted account of this wild and completely unique military organization is gripping, masterful, and moving. A must-read for anyone with even the slightest interest in military history.”
—Flint Whitlock, co-auther of Soldiers on Skis

“As the son of a 10th Mountain trooper, I consider The Winter Army essential reading for anyone interested in this fascinating history. With great attention to detail and depth of research, Maurice Isserman brings a new, more personal perspective to the story of the division during World War II, allowing me to get to know, as young men, the veterans I’ve known for many years.”
—Stephen Coffey, Immediate Past President, 10th Mountain Division Descendants, Inc.

"Captivating . . . It is good to have the stories of these men between hard covers, for their heroics occurred three-quarters of a century ago and are in danger of disappearing.”
—Wall Street Journal

“A solid military history focused on an elite division that made its mark in the final stages of World War II.”
—Kirkus Reviews

“Drawing from letters sent by 10th Mountain Division soldiers to family and friends back home, Isserman provides frontline views of such famous battles as Riva Ridge and Mt. Belvedere, and relates how the unit’s veterans took part in the postwar rise of the American ski industry. The result is an entertaining, well-sourced blend of military and sports history.”
—Publishers Weekly

“Isserman has created a fascinating study of this branch of specialized American soldiers during WWII, a bit of military history that will be of interest to WII buffs and readers who have been on the slopes or gazed in wonder at mountains' majesty.”
—Booklist

“A masterwork… the work of a master craftsman.”
—Vail Daily

“Maurice Isserman masterfully lets us listen in as the original mountain soldiers tell their stories of acting as America’s elite alpine troops. His well-researched reliance on firsthand accounts adds a much-needed new chapter to the rich history of the famed 10th Mountain Division . . . The combat-tested veteran, the military historian or the interested casual reader can enjoy this book . . . The Winter Army also serves as reminder to our nation and our Army that we must constantly prepare for war, and in doing so, seek and welcome the perspectives of those outside the military and security community  . . . These are stories that must continue to be told and men that America should never forget.”
—Lt. Gen. Walter Piatt, former commander of the US Army 10th Mountain Division, Army Magazine