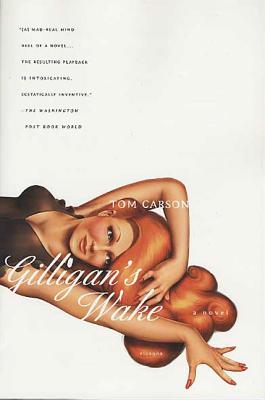 In this kaleidoscopic fantasy, seven uniquely familiar narrators recall the last American century. An old salt shares his memories of fellow PT-boat skipper Jack Kennedy. A New York millionaire gets Alger Hiss a job. An ex-debutante reveals her Jazz Age friendship with The Great Gatsby's Daisy Buchanan. A Dixie redhead dishes up the inside scoop on the Rat Pack. A scientist confesses to his part in every event from Los Alamos to Watergate. And Mary-Ann Kilroy of Russell, Kansas finds romance in Paris before learning why she'll never leave the island. But behind them lurks the man who keeps insisting that his name isn't Gilligan--and who's inventing this brilliant, poignant comic collage for reasons of his own.

Tom Carson, Esquire's National Magazine Award-winning "Screen" columnist, has written on pop culture and politics for the Village Voice, LA Weekly, and Rolling Stone, among others. He lives in Arlington, Virginia.

“An energetic pastiche...Wow. In their wacky conflation of fact and fiction--and their happy confusion of high and low brows--the septet of stories amount to [a] carnivalesque daydream....Just sit right back and you'll hear a playfully paranoid history of the twentieth century.” —Entertainment Weekly

“Read[s] like a crossword puzzle based on the album cover photo of 'Sgt. Pepper's Lonely Hearts Club Band'...Vivid and inventive...Utimately, all that comic energy deepens into a genuinely moving elegy.” —San Francisco Chronicle