A World Safe for Democracy: Liberal Internationalism and the Crises of Global Order (Hardcover) 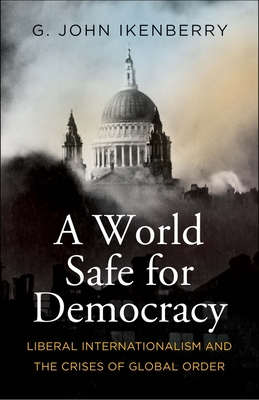 A sweeping account of the rise and evolution of liberal internationalism in the modern era, selected as a Best Book of 2021 by Foreign Affairs

“A thoughtful and profound defence of liberal internationalism — both as a political philosophy and as a guide to future actions."—Gideon Rachman, Financial Times

For two hundred years, the grand project of liberal internationalism has been to build a world order that is open, loosely rules-based, and oriented toward progressive ideas. Today this project is in crisis, threatened from the outside by illiberal challengers and from the inside by nationalist-populist movements. This timely book offers the first full account of liberal internationalism’s long journey from its nineteenth-century roots to today’s fractured political moment. Creating an international “space” for liberal democracy, preserving rights and protections within and between countries, and balancing conflicting values such as liberty and equality, openness and social solidarity, and sovereignty and interdependence—these are the guiding aims that have propelled liberal internationalism through the upheavals of the past two centuries. G. John Ikenberry argues that in a twenty-first century marked by rising economic and security interdependence, liberal internationalism—reformed and reimagined—remains the most viable project to protect liberal democracy.

G. John Ikenberry is the Albert G. Milbank Professor of Politics and International Affairs at Princeton University, as well as a Global Scholar at Kyung Hee University, South Korea. His books include Liberal Leviathan and After Victory.

“The most articulate expression of the liberal international order is A World Safe for Democracy by John Ikenberry.”—Fareed Zakaria, on the Ezra Klein Show

"One of [the Biden team's] chief manifestos for change, as some of the incoming Bidenites have already privately conceded, will be G. John Ikenberry’s new book, A World Safe for Democracy . . . the crowning achievement of the Princeton University’s scholar’s decadeslong work explaining and defending the liberal international order. . . . According to a senior member of the incoming Biden team, . . . the new administration is paying a great deal of attention to Ikenberry’s ideas."—Michael Hirsh, Foreign Policy

Selected as a Foreign Affairs Best Book of 2021

“Ikenberry's text succeeds in the rare accomplishment of maintaining readability while avoiding superficiality. The book is an impressive work of scholarship.”—P. R. Babbitt, CHOICE


Shortlisted for the 2021 Arthur Ross Book Award, sponsored by the Council on Foreign Relations


“John Ikenberry once more shows why he remains the most intelligent and most articulate defender of a world built over two centuries by Britain and the United States. Yet another tour de force by one of the most important voices in international relations today.”—Michael Cox, Emeritus Professor of International Relations, London School of Economics

"The foremost proponent of liberalism amongst current international relations scholars has delivered a timely and penetrating critical assessment of liberalism’s origins, development, contradictions, and prospects. This book is a thoughtful and valuable counterweight to the shallow and seductive blandishments of both populists and authoritarians."—Barry Buzan, London School of Economics and Political Science

"John Ikenberry is the preeminent theorist of liberal internationalism in the world. A World Safe for Democracy is the product of decades of study, including thoughtful and honest debates with realist and revisionist critiques of the liberal international order. The book couldn't be more timely. . . . A must-read."—Anne-Marie Slaughter, CEO, New America

"At a time when the liberal internationalist project is under sustained attack, a rigorous defense of it by a leading scholar is greatly to be welcomed. With deep research and careful analysis, John Ikenberry shows how the liberal world has worked in the past and can be made to work in the current era."—Robert Jervis, author of How Statesmen Think