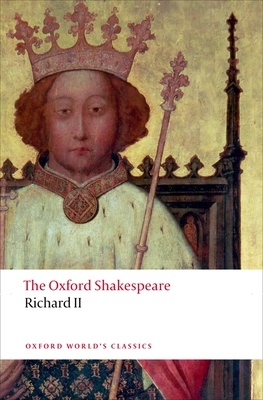 Written in 1595, Richard II occupies a significant place in the Shakespeare canon, marking the transition from the earlier history plays dominated by civil war and stark power to a more nuanced representation of the political conflicts of England's past where character and politics are inextricably intertwined. It is the first of four connected plays--including 1 Henry IV, 2 Henry IV, and Henry V--generally considered Shakespeare's finest history plays.
The drama of Richard II centers on the power struggle between the grandiloquent King Richard and the plain-spoken, blunt Henry Bolingbroke, who is banished from Britain at the beginning of the play. But when Henry's father John of Gaunt dies, Richard confiscates his property with no regard to his son's rights, and Bolingbroke returns to confront the king, who surrenders his crown and is imprisoned in Pomfret Castle, where he is soon murdered. This new edition in the acclaimed Oxford Shakespeare series features a freshly edited version of the text. The wide-ranging introduction describes the play's historical circumstances, both the period that it dramatizes (the start of the "wars of the roses") and the period in which it was written (late Elizabethan England), and the play's political significance in its own time and our own. It also focuses on the play's richly poetic language and its success over the centuries as a play for the stage. Extensive explanatory notes help readers at all levels understand and appreciate the language, characters, and dramatic action and the book's lively illustrations provide a sense of the historical background and performance of the play. About the Series: For over 100 years Oxford World's Classics has made available the broadest spectrum of literature from around the globe. Each affordable volume reflects Oxford's commitment to scholarship, providing the most accurate text plus a wealth of other valuable features, including expert introductions by leading authorities, voluminous notes to clarify the text, up-to-date bibliographies for further study, and much more.

Anthony Dawson is Professor Emeritus at the University of British Columbia. Paul Yachnin is Tomlinson Professor of Shakespeare Studies at McGill University and President of the Shakespeare Association of America.