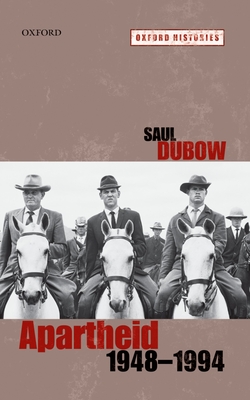 This new study offers a fresh interpretation of apartheid South Africa. Emerging out of the author's long-standing interests in the history of racial segregation, and drawing on a great deal of new scholarship, archival collections, and personal memoirs, he situates apartheid in global as well as local contexts. The overall conception of Apartheid, 1948-1994 is to integrate studies of resistance with the analysis of power, paying attention to the importance of ideas, institutions, and culture.
Saul Dubow refamiliarizes and defamiliarizes apartheid so as to approach South Africa's white supremacist past from unlikely perspectives. He asks not only why apartheid was defeated, but how it survived so long. He neither presumes the rise of apartheid nor its demise. This synoptic reinterpretation is designed to introduce students to apartheid and to generate new questions for experts in the field.

Saul Dubow is a Professor of African History at Queen Mary, University of London. Dubow previously taught at the University of Sussex. Born and brought up in Cape Town, he has degrees from the universities of Cape Town and Oxford. He has published widely on the development of racial segregation and apartheid in all its aspects: political, ideological, and intellectual. He has special interests in the history of race, ethnicity, and national identity, as well as imperialism, colonial science, and global circuits of knowledge. He is on the editorial board of the Journal of Southern African Studies.